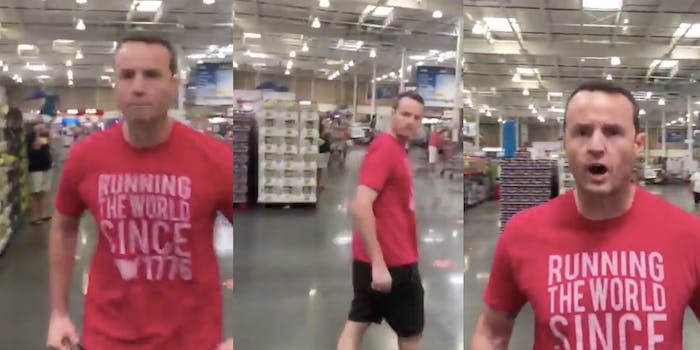 'I feel threatened. Back up! Threaten me again.'

A video of a man yelling at other customers in a Fort Myers, Florida Costco went viral on Twitter on Tuesday morning.

The short, 17-second video appears to shows a man yelling at another customer who is filming the incident. He repeatedly screams “I feel threatened,” but he spends the majority of the video walking aggressively toward the person filming.

“I feel threatened. Back up! Threaten me again,” the man says in the video. “Back the f*ck up, and put your f*cking phone down.”

A woman who is with the yelling man attempts to calm him down and repeatedly says, “Dan!” Meanwhile, the man filming repeatedly notes that “Dan” is the one who is getting closer to him despite saying he feels threatened.

“I’m six feet away from you,” the man filming said. “I’m not harassing you!”

Director Bill Corben reshared the video on his Twitter account, where it quickly went viral. He gave some context for what happened before the person behind the camera began filming.

“Florida man at Fort Myers Costco in ‘Running the World Since 1776’ shirt flips out on elderly woman who asked him to wear a mask and man who defended her,” Corben said on Twitter.

Corben said that Costco employees escorted “Dan” out of the building.

“To give Costco the credit, they escorted him out and made me wait inside and monitored him until he left and then they send someone with me to the care to make sure I’m okay,” one of the people Dan yelled at allegedly told Corben.

Costco put a mandatory mask rule in place for customers and employees on May 4. The rule appears to still be in place. The Daily Dot has reached out to Costco and will update with a response.