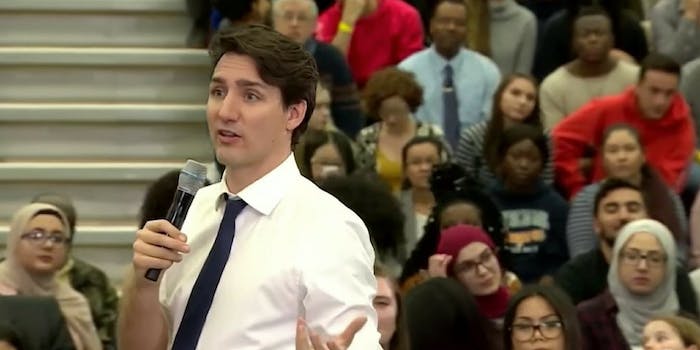 Canadian Prime Minister Justin Trudeau is most definitely a “male feminist.” He’s an advocate for women, both in his words by calling for the celebration of women’s achievements, and in practice by establishing a gender-equal cabinet.

He also mansplains feminism to women, which is a primary defining feature of “male feminists” everywhere.

During the Edmonton, Alberta, Canada, stop on his cross-country town hall tour, Trudeau interrupted a women asking a question to correct her on her gender-neutral language. The woman, representing World Mission Society of God, a religion that explores “God the mother,” asked Trudeau about religious charitable groups’ abilities to do volunteer work.

“We have received many awards throughout the whole world, however, unfortunately in Canada, our volunteering as a religious charitable organization is extremely difficult…In actuality, we cannot do free volunteering to help our neighbors in need as we truly desire,” the woman told Trudeau, standing in the bleachers while speaking into a mic. “We came here today to ask you to also look into the policies that religious charitable organizations have in our legislations so that it can also be changed, because maternal love is the love that’s going to change the future of mankind.”

Yes, though the woman acknowledged her group’s dedication to “maternal” love, she used a word that Trudeau immediately took issue with: mankind.

“We like to say ‘peoplekind,’ not necessarily ‘mankind,’ because it’s more inclusive,” Trudeau interrupted the woman.

“There we go, exactly! Yes, thank you,” the woman replied positively in response, the crowd clapping at Trudeau’s correction.

“We can all learn from each other,” Trudeau continued, before allowing the woman to finish her question.

It seems that the woman herself wasn’t too put-off by Trudeau’s interruption and explanation to why she should use “personkind” instead. But while the crowd at the town hall cheered Trudeau’s assertion, the internet was none too “kind” to the prime minister, who appeared to have not only interrupted the woman, but also “mansplained” to her what gender equality looks like.

Say what you want about the Canada Summer Jobs "kerfuffle", but I can "attest" that no woman should be mansplained about feminism, not even from someone as good looking as PM @JustinTrudeau #peoplekind https://t.co/6kxomUTcIT

TFW a man tells you you're the wrong type of feminist https://t.co/wQ8CkmXwa5

Dear @JustinTrudeau
Using the word “mankind” is fine. Publicly embarrassing someone for using it is not. #Canada https://t.co/dFZQkbwN7G

Justin Trudeau correcting a girl for saying "mankind" because it's offensive is truly amazing pic.twitter.com/SDCcpSXhkB

Sorry, Trudeau—that’s an “A” for effort, but an “F” for execution. No worries, however. He’ll restore his woke PM persona, and the internet’s love in him, soon enough.

Watch the full interaction between Trudeau and the woman asking him a question below: