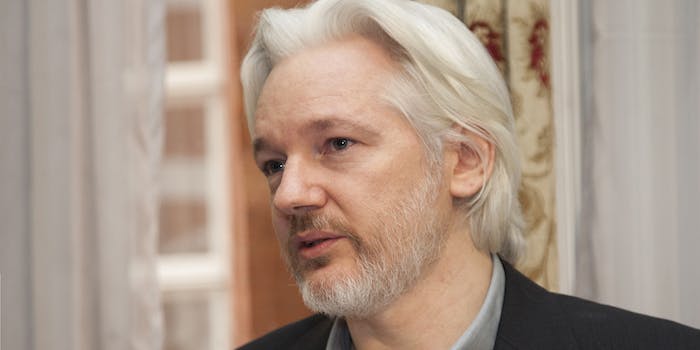 The WikiLeaks founder 'complained of hearing imaginary voices and music.'

People in conspiracy circles think recent reports of Julian Assange’s “preparing to kill himself” is a “predictive programming” conspiracy.

Reddit’s r/Conspiracy has had a field day with the reporting on Julian Assange’s day in court on Tuesday. According to CBS News, the WikiLeaks founder “complained of hearing imaginary voices and music” while detained in a high-security British prison. Michael Kopelman, a psychiatrist who has interviewed him nearly two dozen times, says Assange would be a “very high” suicide risk if he’s extradited to the United States.

Assange, 48, is being charged under the Espionage Act, accusing him of conspiring with former Army intelligence officer Chelsea Manning to collect and publish military secrets—specifically Iraq War files from 2010. Kopelman cited Assange’s “severe depression” and “psychotic symptoms,” which included sensory hallucinations from his time in solitary confinement at London’s high-security Belmarsh Prison.

However, it’s the language being used around this information that has conspiracy thinkers openly pondering whether there’s more than meets the eye. Popularized most recently by controversial, right-wing commentators Alex Jones and David Icke, predictive programming is the “theory that the government or other higher-ups are using fictional movies or books as a mass mind control tool to make the population more accepting of planned future events.” Usually, a film or TV show, like The Simpsons, would serve as a pretext. In this case, the “fictional” event is Jeffrey Epstein’s unusual death.

On Reddit, the discussion went instantly to American financier and convicted sex offender Jeffrey Epstein, who died under mysterious circumstances in a Manhattan jail. He had been arrested for sex trafficking of minors in Florida and New York, with other now-adult women coming forward to describe their abuse by Epstein. Suicide was the official ruling in his death; however, the skepticism of his death remains. In relating Assange to Epstein, conspiracy tweeters and redditors see similarities.

u/oasisreverie wrote: “He has been showing signs that he was tortured… He probably is having hallucinations as a result of being in solitary confinement for so long. I hope he is freed soon before his condition worsens. That being said, if he does die in prison, I will be suspicious of murder. I do not believe it is easy to kill one’s self in a high security prison.”

Kopelman says Assange’s suicidal thoughts “arise out of clinical factors… but it is the imminence of extradition that will trigger the attempt,” suggesting “he will deteriorate substantially” if extradited to the United States. U.S. attorney James Lewis challenged Kopelman’s integrity of Assange’s claims.

Others are more concerned about Assange’s case, for less conspiratorial reasons, as it could have implications on the notions of a free press.

Writer Cory Doctorow tweeted: “Julian Assange’s extradition hearings are frankly terrifying, and if you care about the free press, you should be worried, irrespective of whether you like Assange or Wikileaks. As the old saying goes, ‘Hard cases make bad law.'” He added: “The Trump DoJ indictment goes somewhere that no other president has dared to go: criminally charging a publisher for their role in the publication of classified docs, something that press outlets do regularly.”