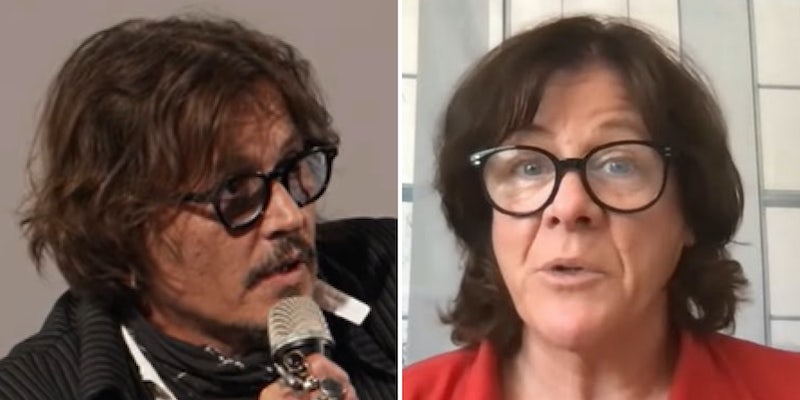 They're accusing the publicist of an 'online smear campaign.'

The verdict in Johnny Depp and Amber Heard’s trial regarding accusations of domestic violence between the pair was handed down at the beginning of June, but aftershocks have continued on Twitter.

Laura Bockov, an internet personality whose account focuses on her support for Depp in his trial against Heard, is claiming that the admin behind a pro-Depp Twitter account is a publicist who worked with Heard and uses a fake name online. Other Depp supporters agree and say that the admin in question, who also speaks about intimate partner violence, is running a smear campaign against the actor.

The user, Kamilla (@k4m1laa), has denied this on her own Twitter. Some users, however, think that Bockov is simply accusing any Black women related to the trial of being Kamilla, and that doing so is insensitive.

On Wednesday, Bockov tweeted that the person behind Kamilla’s account could be Crisanta White, a publicist. In her tweet, Bockov linked a Deadline article that announces White’s hiring at Shane/Nahley, a public relations firm.

Bockov seems to have made the connection because White is called “a spokesperson” for Heard in an article for Gadget Officials, a tech and gaming news outlet.

Hours after Bockov insinuated that White was behind Kamilla’s account, Kamilla tweeted that Bockov had “doxxed” (or revealed personal information about) White and that Bockov had been in conversation with Depp’s team during his trial.

“[White is] already being aggressively harassed and their only proof she’s me is that she’s Black and they think I work in PR,” Kamilla tweeted. She also said that White is the second Black woman that Depp supporters have harassed under the assumption that the Black woman is Kamilla.

Bockov has continued to tweet about White being behind Kamilla. On Wednesday, Bockov claimed that “‘Kamilla’ is an inauthentic PR account” and tweeted a link to Shane Communications, which is a branch of Shane/Nahley Communications according to OpenCorporates, a website that discloses information on the structures of corporations.

Jenna for Depp, another Twitter supporter, has also tweeted about Kamilla and White. On Wednesday, she tweeted that White’s Twitter and Instagram accounts had been made “private.” Jenna tweeted that White “being exposed” as Kamilla is “significant” because White, who Jenna believes is Kamilla, is leading an “online smear campaign” against Depp.

Other Twitter users are speaking out about Bockov’s claim that White is Kamilla. @CocoaMochaCrml tweeted that Bockov and other Depp supporters are “harassing” and trying to dox Kamilla and “any and all Black women with any slight, perceived or tangible connection to Amber Heard.”

In step with @CocoaMochaCrml’s sentiment that Depp supporters are assuming “any and all” Black women are Kamilla, supporters of Kamilla are changing their names and profile pictures to that of her account and using the hashtag “#IAmKamillaToo,” seemingly in an effort to throw Depp supporters off.

In response to claims that Bockov had been doxxing and harassing White, Bockov tweeted that “there is no doxxing.”

“Can we move on please,” Bockov tweeted. “I researched and believe my information was valid and honest.”

The Daily Dot has reached out to Kamilla, Bockov, and @CocoaMochaCrml.