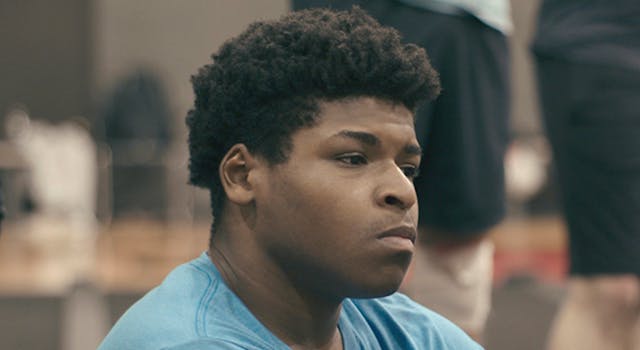 Harris, who was arrested last month on child pornography charges, is pleading for release from pretrial detention, per BuzzFeed. Federal prosecutors, however, claimed in a motion that the cheerleader is a “clear and present danger to the community.”

“Even when Harris was tripped off to a possible investigation into his crimes, he was not able to control his impulses,” the motion stated. “And he continued to victimize multiple other children while living in a residence with responsible adults present.”

The motion stated that Harris, 21, asked a 13-year-old boy for “booty” pictures and that he often sent sexually explicit photographs of himself to that minor.

“As Harris’ fame grew through his acting career, Harris appears to have added to his predatory arsenal,” the motion stated. “By using money to exploit his minor victims.”

The District Court for the Northern District of Illinois did not immediately respond to the Daily Dot’s request for comment.

“Harris, by his own admission, has already forever damaged at least between 5 to 10 minor boys through his criminal actions,” the motion stated.

Lawyers representing Harris requested he be released from jail and await trial from his home because he has asthma and is at risk for contracting COVID-19 in jail, the Chicago Tribune reports. But the motion filed urges against this.

A boy named Charlie told USA Today that he posted a photo of himself stretching his leg above his head on Snapchat, and Harris messaged him to “do it naked and take a video” and send it to him. “It was just eating me alive,” Charlie said. “It was just making me so gross and uncomfortable. Every time I saw his name or something like that, I was just cringing about it.”

Charlie, his brother Sam, and their mother filed a lawsuit against Harris, Varsity, United States All Star Federation, and the Cheer Athletics gym.

Last month, a spokesperson disputed the accusations brought against Harris.

“We categorically dispute the claims made against Jerry Harris, which are alleged to have occurred when he was a teenager,” a spokesperson for Harris said, ABC News reported in September. “We are confident that when the investigation is completed the true facts will be revealed.”