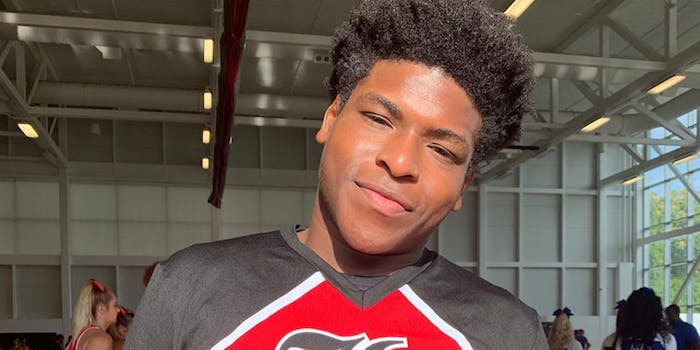 According to screenshots provided to USA Today, Harris repeatedly asked twin brothers Charlie and Sam to share photos of themselves naked over the course of a year.

Charlie told USA Today that in February 2019, Harris, then 19, isolated Charlie, then 13, in a secluded bathroom and “begged him to have sex.” The incident allegedly occurred during American Cheerleaders Association’s national competition in Fort Worth, Texas.

Charlie said after three months, Harris again asked him to join him at “a place for [them] to do stuff.” This was during the Summit cheerleading competition in Orlando, Florida.

A screenshot of a text conversation provided to USA Today shows that Charlie responded to Harris saying he “can’t sorry” and “maybe another time.” Harris texted, “there won’t be but it’s ok I still wanna hangout w you.”

Charlie told USA Today that “didn’t want to make a deal” out of the proposition.

Another screenshot shows that Harris sent a selfie to Sam with the text, “Would you ever want to ****.”

Harris allegedly further exploited Charlie’s fans’ requests for FaceTime videos with Harris. Charlie said that following the release of Cheer in January, his friends and fans wanted to say hello to Harris via FaceTime. Charlie said Harris agreed but under the condition that Charlie send him nudes.

Harris also allegedly responded to a photo of Charlie on Snapchat, where the minor is seen doing stretches, asking him to “do it naked and take a video and show me.”

Kristen had numerous exchanges with U.S. All Star Federation Vice President of Membership Amy Clark but was frustrated at the lack of further action and insistence that policies were preventing sexual abuse.

Kristen approached the Fort Worth police in July and approached the FBI in August. On Monday, the FBI executed a warrant at a home in Naperville, Illinois, as part of its investigation into Harris.

USA Today report did not publish the twins’ or their mother’s last name to protect their privacy. On Monday, a woman named Kristen Erika tweeted a link to the USA Today article and that she was “in awe” of her sons’ courage:

“It was not an easy decision, but they have bravely chosen to lead the way toward transparency, accountability, and change in the sport they love by telling their story publicly,” the tweet said.

Harris was set to appear in federal court on Thursday afternoon in Chicago, according to CNN.