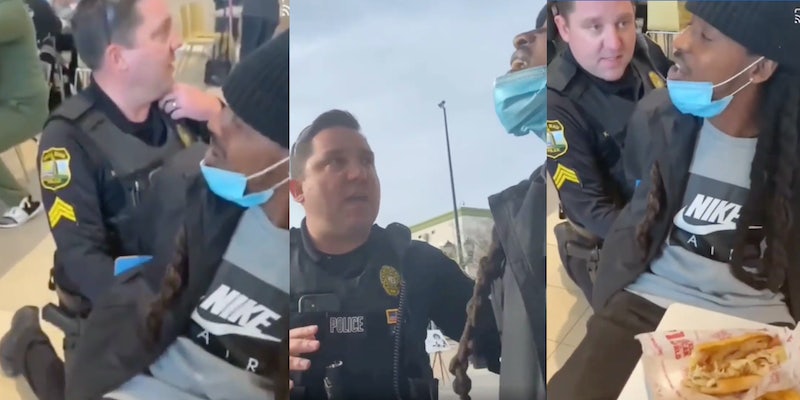 Jamar Mackey was recently wrongfully detained by maskless officers in front of his family at the mall.

Jamar Mackey, a Black man who was wrongfully detained by maskless police officers, has tested positive for the coronavirus.

Mackey is blaming the officers for his COVID-19 diagnosis after they were seen in a now-viral video detaining him at a mall in Virginia on Dec. 19. The officers, who are with the Virginia Beach Police Department, suspected Mackey of a crime he did not commit. A sergeant, who wasn’t wearing a mask, detained Mackey in front of his fiancée, 13-year-old son, and newborn baby while they were seated at the food court in Lynnhaven Mall. In the video, Mackey’s fiancée Shantel Covil tells the sergeant, “Y’all got the wrong person. We don’t even have a black truck.” The sergeant then walks Mackey outside, where they are greeted by more maskless officers.

The couple continues to plead with the officers that they have the wrong person. The sergeant gets on the radio, turns to Mackey to tell him that they did get the wrong person, and says “give me one minute (to explain),” while keeping Mackey in handcuffs. Mackey has to demand for the handcuffs to be removed for the sergeant to comply. The sergeant claims they were looking for a credit card fraud suspect who has dreadlocks and is dressed in all black and that Mackey matched the description. “I sincerely apologize. It was a complete misunderstanding,” the sergeant tells Mackey.

After the video went viral, the officers and the department were slammed for apparent racial profiling. VBPD Chief Paul Neudigate at a press conference on Dec. 21 said VBPD officers are required to wear face coverings, adding that those who failed to wear them “will be addressed,” according to ABC News.

Mackey’s positive coronavirus diagnosis was first reported by local news outlets on Tuesday evening. Covil told WAVY Mackey took a test on Dec. 22 and that he received his diagnosis on Dec. 24. Mackey is experiencing a “low grade fever, a cough, and a sore throat,” according to Covil.

In an interview with TMZ on Wednesday, Mackey and Covil said that they own a sanitation business and that Covil runs a healthcare business, so they have been taking the pandemic seriously. She said they have been testing frequently and are convinced the officers in question infected him. Covil, according to TMZ, has tested negative. However, the couple says they are concerned for their children.

The VBPD refused to say if the officers in question have also tested positive for the coronavirus, citing health privacy laws, according to WVEC.

On Dec. 22, Mackey’s attorney said they are looking into legal action against the VBPD. Mackey and Covil told TMZ they want the maskless sergeant who detained Mackey to be fired.