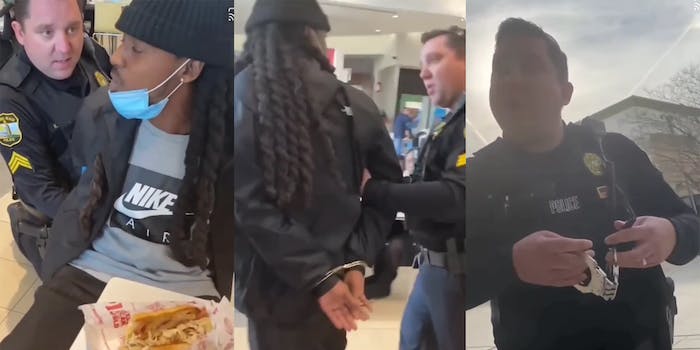 One officer tells the man to 'relax' as he pleads his innocence.

A viral video shows police on Saturday wrongfully detaining a Black man in a Virginia shopping mall because he fit the description of a car thief.

The video, uploaded to Instagram on Sunday by @blm757, begins with an unmasked police officer handcuffing a masked Black man who is eating with his family in the food court of Virginia Beach’s Lynnhaven Mall, WTKR reports. The man—referred to as Jamar by the woman filming—asks what is happening and why the officer is detaining him, as does the woman recording the video.

The officer says he “just want[s] to talk” to Jamar, as the woman filming says, “He did nothing. Y’all got the wrong person. We don’t even have a black truck.”

Jamar tells the woman to record the interaction, and she repeatedly tells him not to snap at the officer.

The video then shows the cops walking Jamar out of the mall. When they get outside, he and the woman filming continue to plead their innocence and press the officers for an explanation.

The second officer tells the cop who handcuffed Jamar, “Might be the wrong one.”

When Jamar tells them that, yes, he is “the wrong one,” the officer tells him to “relax.”

“We got a description of someone who was using stolen credit cards,” the cop who handcuffed Jamar explains. “That person is a Black male with dreads who was wearing all black and is with a boy who was wearing red.”

The woman filming pans her phone to show that the boy with Jamar is dressed in red.

“I sincerely apologize. It was a complete misunderstanding,” the officer says. “If he was using a stolen credit card and a stolen vehicle, then I wouldn’t have talked to him. I would have just taken him into custody and detained him.”

“This is how we get treated in 2020,” says Jamar, unappeased by the officer’s explanation and apology. “Black Lives Matter, that’s why we say it.”

The woman filming the video demands a business card from the officers. When they don’t have one, she asks for their names and a phone number to contact the police department.

The Virginia Beach Police Department did not immediately respond to the Daily Dot’s request for comment, but it released a statement on Sunday saying it was investigating the incident.

“Certainly, anyone would be upset about being detained for something they didn’t do” Chief Paul Neudigate said. “While the video shows the officer stayed calm and respectful throughout the brief encounter, we must ensure the situation merits the response.  We are gathering all the facts to evaluate the incident so we can address the concerns people have raised.”

Social media users largely condemned the officers for not detaining Jamar without asking any questions and not wearing masks.

“My husband always says you come to VA Beach for vacation leave on probation… The police and judicial system here is all messed has been for 20yrs,” Instagram user @rebajill23 commented.

“It seriously comes off the same as those dipshits on YouTube ‘it’s only a prank bro,’” Redditor u/Butters_Duncan wrote. “Cop: does something fucking ridiculous. Also cop: why are you getting so upset? Calm down.”