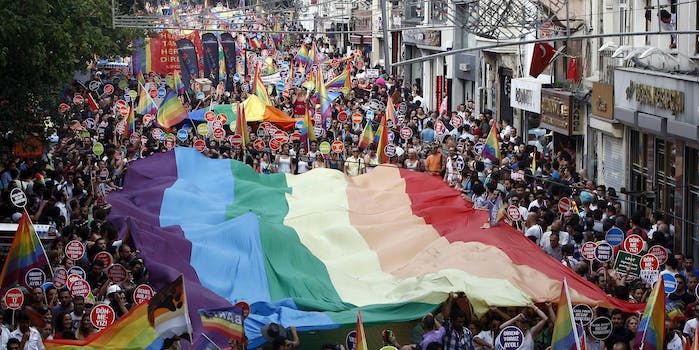 Hande Kader and a friend sat on the ground at Gay Pride Istanbul 2015, defying law enforcement as they attempted to blast the activists with water cannons. The 22-year-old trans activist and sex worker was a prominent defender of LGBT rights. As she spoke out for her community, so too are people calling for justice for her.

Kader was brutally raped and murdered earlier this month in what appears to be a hate crime. She was last seen entering the vehicle of a client in Harbiye near Taksim. Her body was mutilated and set on fire before it was discovered on Aug. 12 in Zekeriyaköy, an upper middle class neighborhood seemingly worlds away form the Taksim Square protests Kader and others participated in during Pride.

Kader’s death comes mere weeks after the alleged beheading of gay Syrian refugee Muhammad Wisam Sankari, who had been in the country only a year. Her death also mimics the 2015 murder of Özgecan Aslan, who survived a rape attempt only to be murdered and burned in Mersin, Turkey. This pattern points to a larger issue of a governmental failure to protect marginalized citizens.

Activists around the world have called for justice and are using the Twitter hashtag #HandeKadereSesVer to raise awareness. “Ses ver” means “speak up” or “give voice to” in Turkish. It’s a fitting rallying cry for such an outspoken woman.

A demonstration is planned on ?stiklal Ave. on Sunday.