ISIS executes two of its members over claims of homosexuality

Members of the terrorist organization ISIS have ramped up killings of men accused of homosexuality in recent weeks.

On Saturday, according to IraqiNews.com, four men were executed in Mosul—two of whom were jihadis who belonged to the group.

“ISIS members executed four people, including two of its own members, on charges of homosexuality and sodomy,” an anonymous source told the news site. “The execution was carried out by throwing the men from the top of a former insurance company building.”

Graphic photos from the incident show one man mid-air after being pushed from the roof of the destroyed building, his face covered by a blindfold and arms tied behind his back. Photos also show local residents gathered to watch the horrifying execution, then throwing large stones at the body as it laid crumpled on the pavement. 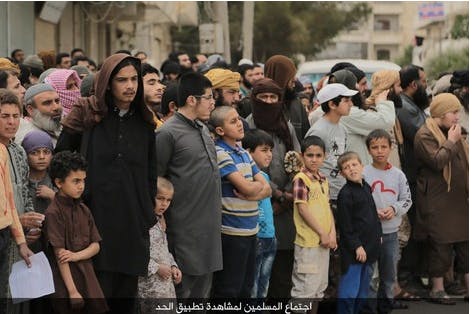 Disturbing photos and videos of allegedly gay men being thrown off tall buildings have become the norm for ISIS. On August 11, the terrorist group released a video of another man being executed in Mosul for homosexuality—similarly flung off a rooftop before a crowd of men and young boys. After that death, an ISIS militant used a microphone to tell the crowd that homosexuality was “forbidden in the caliphate” and would be punished by execution.

The danger for LGBT men in Iraq and Syria is so severe that the United Nations Security Council held its first-ever hearing on LGBT persecution—focused on gay victims of ISIS—in August 2015.

In harrowing testimony, a gay Iraqi refugee using the name Adnan told the U.N. Security Council what he had witnessed before fleeing his country in order to survive.

“There were militiamen or security men who—if they found out someone was gay—would arrest him, rape him, torture him. There were lots of murders supervised by the Iraqi Army,” said Adnan in his testimony to the U.N. Security Council. “Videos came out of people being burned alive or stoned and you can see soldiers in them. I have seen a video where some gay men had ropes put around their necks and they were dragged around the streets, and people were throwing stones at them. And when they were half-dead, they were set on fire. Some people had their rectums glued up and were then left to die in the desert.”

The nonprofit OutRight International (formerly the International Gay and Lesbian Human Rights Commission) has compiled a timeline of homophobic ISIS killings leading back to 2014.

In June 2016, gay Syrian refugee Subhi Nahas—who also addressed the United Nations—was chosen as the grand marshal for the New York City Pride Parade. At the U.N. hearing, Nahas described being outed by his therapist, beaten by his father, and “tracked” by ISIS militants even after escaping to nearby Turkey, before finally arriving safely in the United States.