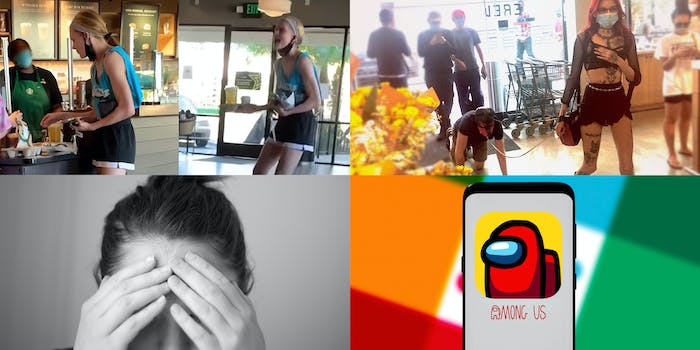 No, it wasn’t a dream: Chris Pratt is really back in the news cycle, this time under scrutiny for his political leanings. In other news, today:

A viral video shows a white woman arguing with a Starbucks barista who asks the woman to wear a mask. The woman is heard screaming “Fuck Black Lives Matter” at the barista, who is Black.

“I’m not gonna listen to anything you say to me when you talk to me like that,” the woman says to Alex Beckom, the Starbucks barista who shared the video on social media. “And I know you’re discriminating against me because I’m a Trump supporter.”

There’s no reason you can’t go out and enjoy some Halloween festivities this year, as long as you follow the same guidelines that have worked for us all year. At least this holiday calls for a mask, right? But even if your costume doesn’t come with one, you can still make a mask work and stay safe. Check out some of our suggestions to live your spookiest life.

OUT FOR A STROLL

Nearly one-third of COVID-19 patients suffered from altered mental functions, according to study

Nearly one-third of hospitalized COVID-19 patients experienced altered mental function, a recent study found. Medical professionals say the study is significant because it’s one of the first deep analyses of the neurological impact of the coronavirus.

I’m not much of a gamer. Still, I found myself gaming on my phone this weekend, and at one point, I looked up to realize that three hours had gone by. I was dozens of rounds deep into Among Us, the multiplayer game that’s all about finding the impostor on the spacecraft—before the impostor finds you. I found it totally consuming, exciting, and easy enough for someone who never got past the first level of Kingdom Hearts.

I’m not alone; millions of people have downloaded the game. Even Rep. Alexandria Ocasio-Cortez played Among Us this week on an immensely popular Twitch stream to encourage young people to vote. As the Daily Dot’s Ana Valens pointed out last month, the game has more in common with the political climate than you might think. And guess what? It’s the perfect thing to keep busy while you stand in line to vote.

Now playing:  Fruit Bats — “I Will Always Love You”