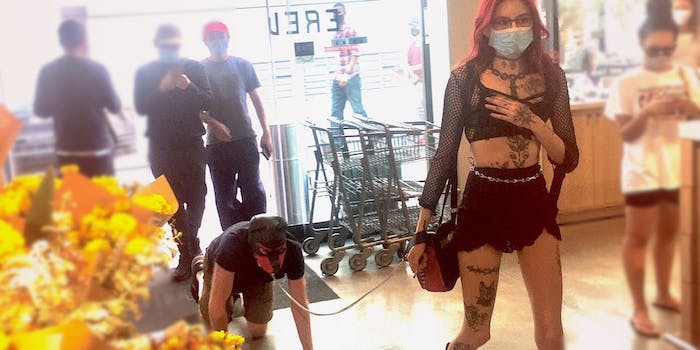 Don't worry, they were wearing masks.

“I couldn’t figure out what the big deal was,” writer Priscilla Page tweeted, “until I realized this was the most ‘open for a surprise’ tweet of all time.”

After Tao’s viral post, Twitter users discovered Lark and her knack for making men submit as her pets. Lark told the Daily Dot that she is a 21-year-old bisexual musician, illustrator, and sex worker who began doing prodom work at 18. Working in sex dungeons became a way for Lark to find shelter; when she was 17, she was left homeless after experiencing sexual assault from a family member.

“I had a few encounters with sex work underage. It was something I wasn’t hesitant to do,” Lark said. “I came across an ad for a dungeon on craigslist, and they said if you qualified you can live there as well. So that’s where the journey began.”

“I just wanted some juice,” she told the Daily Dot. “I was out with my sub and my friends shooting some videos and just doing shopping. We stopped in Erewhon. Lots of cameras and attention, but the security let us through valet and let us check out our pricey basket before finally asking us to leave.”

Granted, the store’s security was respectful about the whole ordeal.

“They said ‘we respect what you are trying to do, but we are going to have to ask you to leave,'” Lark said. “The funny part was that we did have to walk back through the store in order to get the car out of valet. […] The security guards followed us out lol but the valet did still give us our free water! Can’t knock their service I guess.”

Lark also refuted viral claims about the encounter, such as a text exchange posted by Tao claiming she “was whipping the guy” and a text from a user who said she “sat on the patio and fed him out of a dog bowl” before whipping him “with a crazy belt.”

“Didn’t have a dog bowl yet. We bought one after. I did paddle him. No more than twice though,” Lark said. “He tried to touch my leg too high up my thigh and I didn’t like it. There weren’t any children nearby or anything.”

The COVID-19 pandemic notoriously impacted sex workers, particularly offline providers like Mistress Lark. In Lark’s case, the coronavirus-induced economic downturn has lowered her clients’ income, which affects Lark’s ability to make a living as a prodom. And when meeting with her submissives, she has to consider the same health concerns around COVID-19 that anyone else has to navigate. To engage in public play, masks are worn, and most of her clients are tested for COVID-19, she said.

Nonetheless, Tao’s post sparked a much larger argument about kink in public and whether onlookers can consent to exposure to dominance and submission (D/s) play. (This reporter previously covered an adjacent issue the queer politics of public sex, which sparked an equally lively response.)

Mistress Lark believes public play’s shock goes hand-in-hand with femdoms engaging in domination: she questions why “it’s so thrilling for a woman to be in power,” and why it “is so shocking” for others to see. She likewise suggested that lifestyle D/s play isn’t always innately sexual, nor should it be treated as such.

“Public play is obviously controversial,” she told the Daily Dot. “I hear my fellow sex workers’ concerns with consent, and I feel that lifestyle domination is something that shouldn’t be sexualized necessarily. Those who wish to be dominated long-term seek a psychological thrill that’s directly connected to power exchange. It’s empowering for both a ‘top’ and a ‘bottom,’ ‘dom’ or ‘sub.'”

When asked about the backlash toward public play, Lark suggested onlookers are “scared to uncover the complexity of sexuality” because doing so forces them to grapple with parts of themselves that they find uncomfortable: their repressed desires due to social pressure, capitalism’s role in sexually oppressing people through a constant need for material validation, and how life can exist “as fantasy or something outside of [the onlooker’s] current spectrum of reality.”

While Twitter users continue to argue over whether Lark was justified in bringing her submissive out for a pet play session in public, there was little scrutiny on Tao. Did he have the right to share a photo of a prodom and her submissive on Twitter?

Tao told the Daily Dot that the photo reached him through a game of telephone: After an Erowhan shopper snapped the picture and posted it in a group chat, a group chat member shared the photo with one of Tao’s friends. Tao saw the image and proceeded to post it on Twitter.

“I just thought it was really funny. If I had actually been there I prob would have just taken a photo and then gone about my business. Definitely surprising but you know, the Erewhon is like a block away from Rough Trade the bondage store so it’s not that insane,” Tao told the Daily Dot. “I didn’t really think about it much more until my replies were blowing up with tons of arguments about consent which I hadn’t really thought about it, not particularly my world but was interesting to read.”

When asked whether he crossed a line by posting Lark’s photo with her submissive, he said she “was in a public space and obviously not shy” about the pet play session. “She asked me to tag her and on her Instagram [and] is telling every big account that posts it to tag her, so she def wants to be in the public eye,” he said. “She only had like 500 followers on Twitter when this started.”

When asked, Lark confirmed Tao posted the photo without her permission. And while she doesn’t mind all that much (“obviously not great to just be posting random peoples’ faces though but that’s life,” she said), she was quick to point out plenty of people “shamelessly got in front of [her]” to catch her on photo and video.

Tao, meanwhile, learned the hard way that going viral isn’t always a fun time. “The post has gotten to the point of popularity where it’s mostly just people arguing in my replies like a tweet a second basically and I’ve got notifications turned off,” he tweeted.

The Daily Dot reached out to Erewhon for comment.