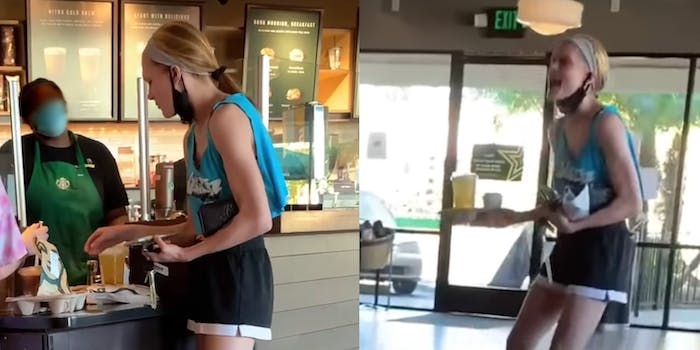 'This is America and I don’t have to do what you say.'

A video that went viral over the weekend shows a white woman arguing with a Starbucks barista who asks the woman to wear a mask. The woman is then heard screaming “Fuck Black Lives Matter” at the barista, who is Black.

Alex Beckom, a Starbucks barista in San Diego, California, posted the minute-long video on TikTok and Facebook on Sunday.

According to the description of the video, Beckom asked the customer to keep her mask on, which she initially did. She then took it off, which is when the video begins.

“I’m not gonna listen to anything you say to me when you talk to me like that,” the woman says to Beckom, who is wearing a mask behind the counter and handing the customer her drink.  “And I know you’re discriminating against me because I’m a Trump supporter.”

“Sure,” says Beckom. The customer responds, “Fuck Black Lives Matter.” Beckom nods and thanks the woman, who then asks for a straw and sugar.

According to the transcript of the video posted as text, Beckom again tells the woman that she has to have her mask on the next time she comes. “No, no it’s not a law,” says the customer, with her voice rising. “And I can show you the penal code and everything. It’s a hoax!”

“You need to leave,” Beckom says.

“No, fuck you!” the woman says before heading out of the store.

The video shows her exiting the store before she comes back in to yell, “Fuck Black Lives Matter!”

“Wtf does BLM have to do with Covid?” Beckom wrote in the caption of her video.

Many people in the comments section expressed their frustration at the customer’s refusal to wear a mask—and racism.

“This is disgusting, I can’t believe you had to handle all of that. Starbucks customers can always be the most abrasive but that was shockingly racist and ignorant,” wrote one user on her Facebook video. “I admired how you handled the situation. You even continued providing her a service.”

Most people were awed by Beckom’s calm during the whole situation, commending her for politely serving the customer despite the customer’s open bigotry.

“I love how you handled that. I would have climbed over that counter so fast and knocked her out. I don’t have patience for stupid people,” wrote one person.

According to another TikTok video posted hours after the original one, Beckom says the woman is pursuing a lawsuit against her.

She shared a screenshot of an Instagram story where the user posted Beckom’s TikTok username and said they’ve filed a police report against Beckom. The name of the Instagram user is not visible in the story. The user claimed a Starbucks employee called her racist and that she’d be filing a report for defamation.

“More money for me im sueing (sic),” reads a part of the post, where she also threatens the Starbucks employee will “lose her job” and that the user would show up “at her work with the police tomorrow.” Beckom did not respond to the Daily Dot’s request for comment on Monday.