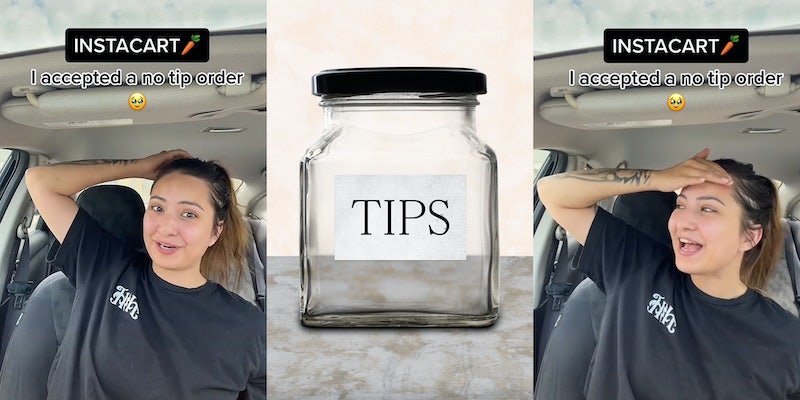 'I'm so confused, did the definition of tip change?'

An Instacart driver sparked a debate on TikTok after saying she was “so mad at” herself for accepting an order with no tip.

The order, a delivery from Walmart, cost a total of around $267 and took user Angelica (@angelicaa__ca) around an hour and a half to complete. Her wages before taxes and gas costs for this delivery came out to just over $20.

The video has sparked a debate about tipping, garnering over 583,00 views in the process as of Saturday.

In the video, Angelica says she had been waiting around two hours for any deliveries to come through. When one finally did, she accepted, not realizing that the customer had not left a tip.

As her cancellation rate is admittedly “a little high,” she opted to still complete the order, making brief pauses to document the entire experience on TikTok.

Angelica says the order was 70 items, including multiple large cases of drinks, meat, produce, and chips. The customer left no tip upon delivery. This means that, including her waiting time, Angelica spent around three and a half hours on the job before earning $20.

The idea of accepting an order purely based on tip set off a debate amongst commenters.

On one side, users said that tipping on Instacart orders should be a requirement, as many delivery drivers depend on tips to make ends meet.

“Should ALWAYS have a tip,” one user wrote. “If you can’t tip don’t order delivery.”

“People saying money is tight and everything so expensive not to tip but if I can’t afford to tip then I don’t place an order,” another shared. “I’d go to the store.”

“WTH? That’s all heavy to carry!!! They should have tipped,” a third added. “Naw reject the order because they are laughing it up sitting on the couch waiting for you!”

“They shouldn’t allow a zero tip,” a fourth argued.

In contrast, other users said that tipping should not be necessary.

“I’m so confused, did the definition of tip change?” one user asked.

“It’s not [necessary] to leave a tip tbh,” a second agreed.

“Some people can’t afford tips and are barely being able to afford groceries,” a third claimed.

Angelica responded to this comment via another video, noting that Instacart customers pay an additional service fee to order groceries through the platform. While she claims Walmart itself has a separate free delivery service, customers need to be Walmart+ members and pay a monthly fee for free delivery.

“I don’t use delivery services myself, because I can’t afford to pay all the extra fees included,” Angelica says. “So, yes, I get that some people are not able to afford groceries. I totally get it […] These are just truly my thoughts that if you are spending the additional money to use the delivery services, it would be very very kind and generous to add something at the end of it.”

However, the majority of comments agreed with Angelica.

As one user wrote, “There is NEVER a reason not to leave a tip.”

We’ve reached out to Angelica via TikTok comment and Instacart via email.