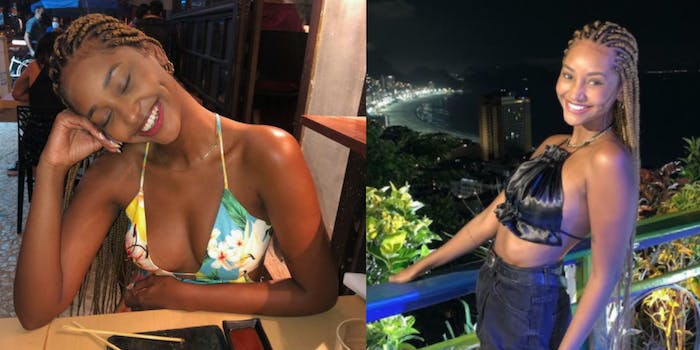 Influencer killed moments after posting about her pregnancy on Instagram

The influencer reportedly recently moved out of the area to avoid the violence there.

A pregnant influencer was fatally shot in Brazil mere hours after posting about her pregnancy on Instagram, where she has over 35,000 followers.

Kathlen Romeu, 24, was hit by a stray bullet during a police shootout, according to the Sun. The 24-year-old, along with and her unborn child, was pronounced dead upon arrival at the hospital.

Hours before the Tuesday shooting, Romeu posted about her pregnancy: She said she was experiencing “lion’s hunger” and morning sickness, according to the Sun. She previously shared she was going to name her child Maya or Zyon, depending on the sex.

Police in Brazil are reportedly investigating which party—the police or suspects—fired the fatal shot. Romeu’s grandmother reportedly told Brazilian media that the influencer recently moved out of the area to avoid the violence there.

A protest reportedly broke out in the street in response to the incident. And some online are casting blame on the police, with Brazilian reality show star Thelma Assis accusing them of “genocide.”

According to the Sun, Romeu’s partner penned a tribute for the mother of his child online.

“My love will never be forgotten, you and Maya/Zayon will always live inside of me,” he reportedly wrote. “The ground has been taken from beneath my feet. Sometimes it’s hard to understand God’s will, but I know you’re better than us. Here I will only miss you and the memories of you, the most radiant and lively person I’ve met in my life.”

Romeu was reportedly three months pregnant. She only recently announced her pregnancy to her followers, writing late last week, “I’m discovering myself as a mother and I’m scared thinking about how it’s going to be… I laugh, cry and I’m afraid. A mixture of feelings.”