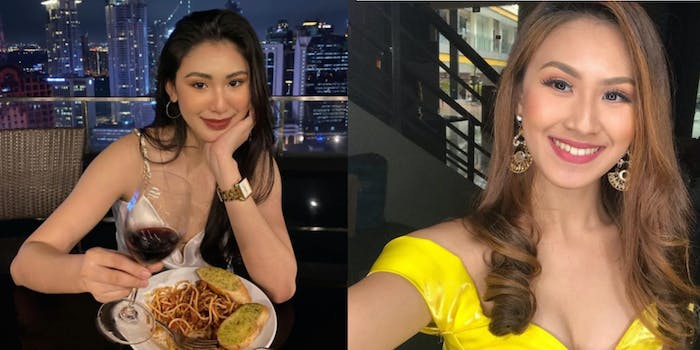 Police have filed a provisional charge of rape with homicide against 11 men.

Haunting footage captured the final moments of a flight attendant who died in a hotel room on New Year’s Day.

Christine Angelica Dacera, an influencer who has over 182,000 followers on Instagram, was last captured via CCTV footage in the hallway of the City Garden Grand Hotel in Makati City on New Year’s Eve, GMA News reports.

In the video, she’s barefoot and holding a glass of wine. She’s with at least three men as they moved between rooms. She’s seen kissing a man in shorts with a backward-facing baseball cap.

Hours later, Dacera was found unconscious in her room. The 23-year-old was pronounced dead at a local hospital after being rushed there by friends and hotel staff.

Makati City police say there’s evidence Dacera was raped. On Monday, police filed a provisional charge of rape with homicide against all 11 men who had partied with Dacera, the New York Post reports.

It’s not clear what caused Dacera’s death, though an initial autopsy says she died of a “ruptured aortic aneurysm.”

Makati police chief, Colonel Harold Depositar, told the Philippine Daily Inquirer the aneurysm may have been caused by very strenuous activity and a high level of alcohol toxicity.