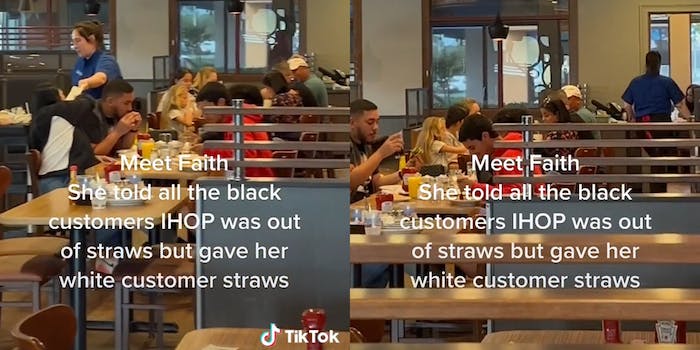 ‘She told all the black customers IHOP was out of straws’: Black customer says IHOP worker only gave white customers straws in viral TikTok

'Leave her a penny tip!'

In a viral TikTok video, a Black customer accuses an IHOP employee of giving only white customers straws after being told they were out.

“Meet Faith. She told all the black customers IHOP was out of straws but gave her white customer[s] straws,” the user, @j._bianca, wrote via text overlay on the video.

The customer pans the camera to show other customers with straws in the Orlando IHOP.

“Faith IHOP in Orlando just racial profile[d] us by not providing straws however making sure her white customers received them!!” she captioned the TikTok.

The video received over 52,000 views, and several users dismissed the customer’s claim they were discriminated against.

“Maybe they ran out of straws, did you ever think about that it’s not profiling you,” one user said.

“Maybe they out…. It doesn’t always have to be about your damn color,” another said.

The TikToker clarified in the comments that they arrived before any of the white parties that received straws.

Others said they couldn’t see others drinking from straws in the video.

“I saw a guy drink out of his cup, no straw,” one user said.

“I see people sipping the glass no straw,” another said.

However, some showed support for the customer and suggested she report their server to corporate and leave a small tip.

“Leave her a penny tip!” one user urged.

Another suggested they grab some straws for themselves if their server wouldn’t get them any.

“I would’ve gotten up n got one for myself i dont play [that],” they said.

However, the customer responded, saying they didn’t know they could grab their own straws.

“We found out when we were about to leave. Only because another table told us,” she said.

The Daily Dot reached out to @j._bianca via a TikTok comment and IHOP via email.