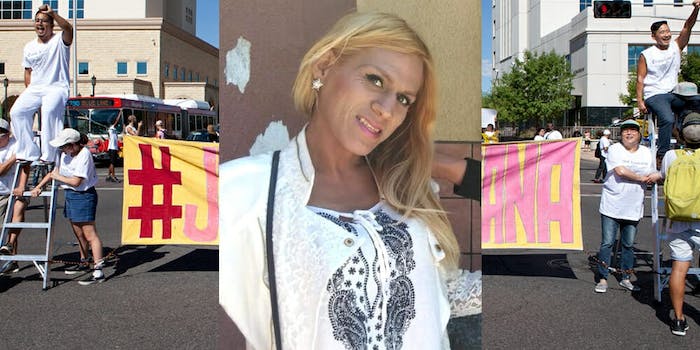 Her death could have been prevented, her family's lawyers are saying.

Roxsana Hernández Rodriguez, a 33-year-old transgender woman who traveled from Honduras to the United States with a caravan of Central American migrants in May, was found to have been beaten while in Immigration and Customs Enforcement (ICE) custody, according to an independent autopsy via the Daily Beast.

The autopsy revealed that Hernández Rodriguez’s body had evidence of physical abuse, including “deep bruising” on her hands and abdomen that indicated “blows, and/or kicks, and possible strikes” to her body, and “extensive hemorrhaging” on both her wrists that are “typical of handcuff injuries.”

The autopsy concluded that Hernández Rodriguez also went untreated for dehydration for an extensive period of time, with Kris Sperry, the forensic pathologist who wrote the report, stating that detainees said she experienced diarrhea and vomiting over “multiple days,” to the point of her becoming “gravely ill” before receiving medical treatment.

According to BuzzFeed News’ original reporting on Hernández Rodriguez’s journey in the caravan and her death, she entered the San Ysidro Port of Entry on May 9, where she asked for asylum. She was then detained by U.S. Customs and Border Protection (CBP), then placed in ICE custody on May 13, according to ICE.

In the original press release about Hernández Rodriguez’s death, in which ICE dead names her, she was transferred to a transgender unit at the Cibola County Correctional Center on May 16, then admitted to Cibola General Hospital on May 17 “with symptoms of pneumonia, dehydration and complications associated with HIV.” She died on May 25 while in intensive care, with ICE reporting that her preliminary cause of death was cardiac arrest.

This second autopsy, however, reveals that ICE’s treatment of Hernández Rodriguez was “far beyond neglectful,” according to the attorney representing her family. While the autopsy also concluded that her cause of death was most likely “severe complications of dehydration superimposed upon HIV infection,” her lawyer, along with the Transgender Law Center, say that her death was “entirely preventable.”

“…Roxsana was shackled for a long time and very tightly, enough to cause deep bruising on her wrists. She also had deep bruising Injuries consistent with physical abuse with a baton or asp while she was handcuffed, according to an examination of the tissue by an independent expert board-certified forensic pathologist,” Lynly Egyes, the center’s director of litigation, said in a statement on Monday. “In the final days of her life, she was transferred from California to Washington to New Mexico, shackled for days on end. If she was lucky, she was given a bottle of water to drink.”

Following the autopsy, the law center and Hernández Rodriguez’s family’s lawyer, Andrew Free, have filed a Notice of Wrongful Death Tort Claim in the New Mexico.

“She journeyed thousands of miles fleeing persecution and torture at home only to be met with neglect and torture in this country’s for-profit human cages,” Free told the Daily Beast.

Speaking to BuzzFeed News in April, Hernández Rodriguez had said that she left Honduras because of the discrimination and violence she faced because she was transgender. She said she had been raped by four members of the MS-13 gang, and contracted HIV as a result. The gangs continued to threaten her to leave Honduras, despite her not wanting to leave her country.

“I didn’t want to come to Mexico—I wanted to stay in Honduras but I couldn’t,” Hernandez said at the time. “They kill trans people in Honduras. I’m scared of that.”

In the Transgender Law Center’s statement, Hernández Rodriguez’s sisters said her death was an injustice. She had dreamt of opening a beauty salon to help her family in Honduras, they said, and had hopes of living a better life.

“It’s difficult to accept that she was taken from us because of negligence, because of not giving her support and medication that she needed, because they treated her like an animal,” the sisters said in the statement. “It’s not fair that she fled Honduras looking for a better life and instead she was murdered. Now all we have left with is the hope that we can see justice for her.”