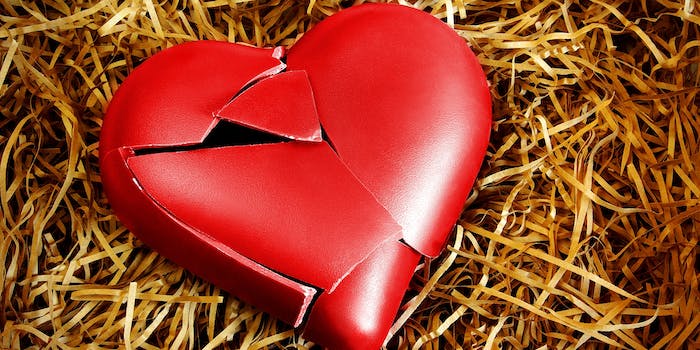 How to get over a breakup, according to science

There are few universal truths on which we, as humans, can agree upon: The USB cable is always upside down on the first try, everyone poops, and breakups suck.

Fortunately, you can apply science to fix the first two problems: The little USB symbol is on the top of the cable, and Soylent will surely make a super-metabolizing product so you no longer have to poop (just kidding, maybe). Breakups, though, are merely to be endured. Or so it has long seemed.

A small, growing body of scientific literature suggests that you can “hack” your breakup. While there’s no magic cure for a broken heart, research suggests there are some practices you can do to help yourself get over your breakup and come out of it a better, more-dateable person.

Gary Lewandowski is a researcher at Monmouth University who studies the self in romantic relationships. He co-founded the blog ScienceofRelationships.com and talked with the Daily Dot about some tips, based on his own research, that you can use to guide your best self through a breakup.

In the first days, weeks, and even months after a breakup, it may be tempting to think that you can go back to the way things were before you dated—you were friends, things were easy. You used to love each other (and maybe still do), so why wouldn’t you be able to hang again? But the research suggests otherwise. Couples that are on-again-off-again aren’t very happy.

“You should treat a breakup as a serious decision—whatever caused you to make that serious decision probably is still there for a while, so there’s really no reason to go back on that decision,” Lewandowski said.

Yes, even on social media

“I think the safest course of action is to unfollow and unfriend [an ex] on social media,” Lewandowski said. If you’re constantly checking in on your ex—and we’ve all done it, don’t lie—it can make it harder to let them go.

When you’re reeling from having recently been unceremoniously dumped, or slowly faded on, or whatnot, you should probably take some time for yourself.

Rekindle your relationship—with yourself

This is Lewandowski’s biggest piece of advice: Get back into your old hobbies. Often when people enter relationships, they might have let some of their favorite activities go if their partner wasn’t into them. So pick up that paintbrush, put on those hiking boots, or bust out that stamp collection if that’s your thing, and re-discover yourself.

People in relationships tend to invest in the parts of themselves that best accommodate their partner. And when that relationship dissolves, a piece of their personhood dissolves with it, Lewandowski said. So rediscovering the things that you used to do before you were with your ex serves as a reminder that you’re still a whole, complete person without them.

Lewandowski said his research has found writing down your thoughts and feelings can help get through a breakup. Focusing on the positive outcomes of the breakup—such as having more time for your hobbies, friends, and work—is particularly useful.

“What to avoid is excessive rumination,” Lewandowski said. “You have this desire to keep talking about it over and over and over. But there becomes a point where it becomes counterproductive.”

Maybe don’t go for the rebound

It’s really tempting to think that the best way to get over someone is to get under someone else. And while there’s not a lot of evidence to directly suggest that rebounding is unhealthy, Lewandowski thinks it may not be the most productive thing you can do.

“I think people spend too little time thinking about their relationship choices,” Lewandowski said. “Without spending time in deep reflection about your previous relationship, you’re setting yourself up to make the same mistakes.”

That’s especially true if your relationship wasn’t the healthiest. You should ask yourself why you were drawn to that person and what made you stay, so history doesn’t repeat itself.

But new relationships do help

He drew an analogy with losing a job. You might take a part-time job wherever you can get one, but ultimately you’re likely going to want a job that can develop into a career.

This is important whether you’re the person initiating the breakup, or the one who just got dumped a few hours ago. People are really bad at assessing how they’re going to feel about situations. One of Lewandowski’s studies asked people in relationships how bad they thought they’d feel if the relationship ended. Unsurprisingly, the respondents generally said they anticipated they’d feel pretty awful.

But when he followed up with those participants soon after they had been through a breakup, most of them said they had positive or a mix of positive and negative feelings about it. Only a minority said they felt only negatively.

It takes as long as it takes

There’s no set time frame for how long it takes to get over a breakup. Sometimes people get over them very quickly and are even elated when it’s over. Other times it can tear you up inside for what feels like forever. But if you follow the above advice, you should be back on your feet and return to the dating world as a better, newer version of yourself.