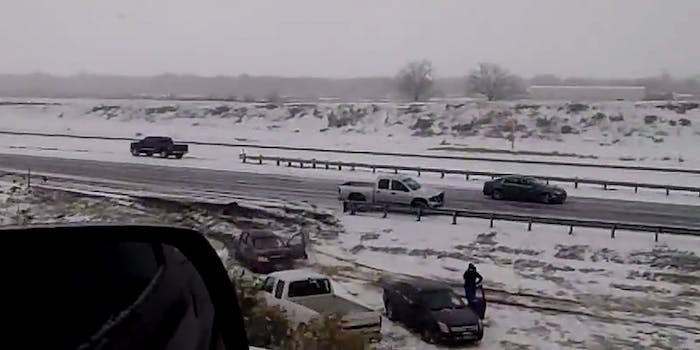 If you’re planning to attempt a highway drive during the polar vortex, watch this first.

If you’re planning to attempt a highway drive during the polar vortex, watch this first.

With below-freezing temperatures all over Colorado, ice has started to form on the roads and people have been advised to stay indoors. Most people who have to go on the road have been cautious, but other cars have continued to travel at regular speeds.

Anthony Salazar was on a bridge that crossed over I-25 near Colorado Springs when he witnessed a speeding van take out about six cars. A few vehicles had already drifted off the highway before the crash, but it started a chain reaction which caused even more damage.

It’s literally a crash course in how not to drive in ice and snow, and there’s at least one major rule: don’t speed.

For other top driver safety courses, check out LegitCourse.