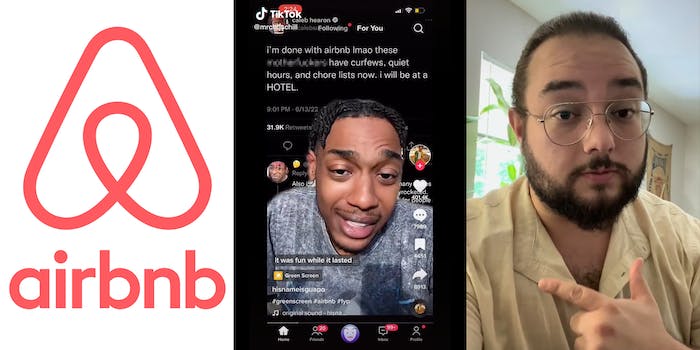 ‘The hosts are going to destroy everything Airbnb was created to be’: Researcher says hosts are ‘destroying’ Airbnb

'The era of the Airbnb is done.'

A popular TikToker went viral for claiming to be a researcher who spent months “digging into Airbnb.” He says he came to the conclusion “the hosts are going to destroy everything Airbnb was created to be.”

In the video, Mr. Chris Chill (@mrchrischill) responds to another TikToker who claims in a viral video “the era of the Airbnb is done.”

Chris says the platform was intended to be used by people who had some extra space and wanted to make “some side money.” Chris says, instead, some hosts are “big developers” who buy entire apartment complexes and then turn those units into Airbnbs that operate like hotels.

“Instead of Grandma renting out her son’s old room, it’s a big developer buying an entire apartment complex and turning 80% of those into Airbnbs,” Chris says.

A representative for Airbnb told the Daily Dot in a statement that “most Airbnb Hosts share just one home and they are using their homes as an affordability tool amidst the rising cost of living.”

“The affordable housing issue in the US can be boiled down to the country simply not building enough affordable housing. That’s why the cost of housing is up everywhere, for everyone,” they said. “The focus needs to be on building more housing for people and Airbnb wants to be part of that solution and help.”

In his video, Chris also claims that there are too many hosts on the platform and that the company doesn’t know how to manage the influx of hosts, leading to poor quality and service.

“These hosts ruin it for everybody,” he concludes. “Airbnb has a lot of potential but unfortunately, it’s being ruined, and their leadership doesn’t know how to handle it.”

Chris, who has nearly 100,000 followers, clarifies at the end of his video his team was made up of graduate-level business students.

The video was viewed over 505,000 times. In the comments section, viewers listed their own reasons for why they are anti-Airbnb.

“The prices used to be very affordable. Now they’re outrageous,” one viewer said.

“Dont forget the outrageous $200 cleaning fees and host still expecting you to do chores before you leave,” another complained.

Airbnb previously spoke to the Daily Dot about its cleaning fees. “While Hosts maintain the ability to choose their own cleaning fees, we do offer tips to Hosts on keeping the amount reasonable, and suggest they consider not charging cleaning fees at all,” a spokesperson said at the time.

This story has been updated to include a statement from Airbnb.

The Daily Dot reached out to Chris via Redbubble and TikTok comment.