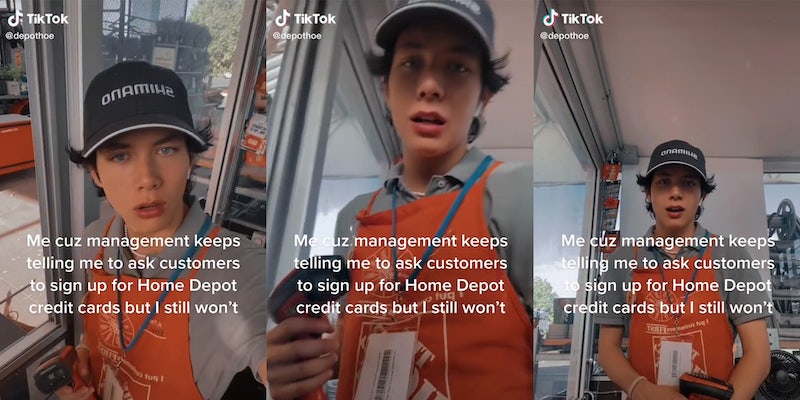 ‘They’ll literally try and make us gaslight them too’: Home Depot worker says he refuses to ask customers to sign up for credit cards

'Me bc ik those credit cards are gonna hurt their credit score.'

One Home Depot worker went viral on TikTok after claiming management is encouraging him to push the company’s credit cards, but he refuses to do so.

In a video with over 130,000 views, user @depothoe, shows himself at what appears to be the register of a Home Depot lip-syncing to the words “everyone keeps looking at me like I’m the bad guy, but I’m not the bad guy” with the caption, “Me cuz management keeps asking me to ask customers to sign up for Home Depot credit cards but I still won’t.”

“Like just let them pay and leave,” he added in the caption.

Commenters were quick to share their own opinions on the controversial practice.

“Literally me at my job like I don’t wanna put ppl in debt,” one user said.

“Me bc ik those credit cards are gonna hurt their credit score,” another added.

“I worked at kohls n they basically wanted us to harass people abt it.” a third wrote. “Like sorry but I can’t force someone to sign up for a credit card.”

This is not the first time that Home Depot has found itself embroiled in a controversy. The DIY home improvement giant has previously been subject to criticism after donating to the re-election campaign of Donald Trump and for donating thousands of dollars to the political campaign of Rep. Elise Stefanik, who’s infamous for promoting the “white replacement” conspiracy theory. This is also not the first time its credit cards specifically have been criticized. Back in 2021, a customer went viral for saying she could no longer buy a house after the store card ruined her credit score.

According to NerdWallet, which rated the Home Depot credit card only two stars, new card holders only get a small discount with it, the interest rate can be high, and it offers deferred interest as opposed to waived interest. Overall, NerdWallet advises against getting one.

The DailyDot has reached out to TikTok user @depothoe via TikTok comment and to Home Depot via email.