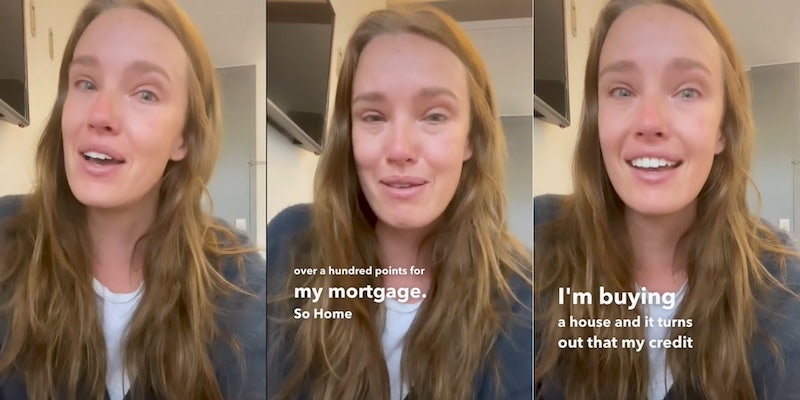 ‘This is the dumbest thing I’ve ever done’: TikToker says she can’t buy a house after opening Home Depot credit card

'For a $9 can of paint, I am now probably not going to get a mortgage.'

A woman on TikTok says opening a Home Depot credit card caused her credit card to plummet so low that she no longer qualifies for a house mortgage.

The TikToker, Cassidy Rainforest Gard or @cassidygard on the platform, said she usually declines offers for store credit cards but was convinced to finally do so at a Home Depot in May. Her video, which she dubbed a public service announcement for anyone considering opening a store card, garnered over 980,000 views by Thursday.

Gard said the Home Depot employee who convinced her to open the card seemed “so nice.” And she was wearing a sticker.

“It just seemed like it was really special and important to her that I open a card,” Gard said in the TikTok. “So I opened the card, and then I just totally forgot that I opened a card.”

Gard said before then, she was in the process of buying a house. But four months after opening the card, she found out that her credit score had dropped by more than 100 points.

“For a $9 can of paint, I am now probably not going to get a mortgage on a house,” Gard said, still in tears. “This is the dumbest thing I’ve ever done.”

Her advice to other shoppers was to simply not take the risk of opening a store credit card—even if the employee talking you into it seems nice. It will ruin your life, she warned.

Some viewers commented that Home Depot wasn’t to blame in this situation and advised Gard to pay more attention to her finances. But Gard was more than willing to accept the blame.

One viewer wrote, “The problem isn’t getting a credit card but that you forgot about it. I don’t mean to diss you but it’s the truth. The lady/company weren’t at fault.”

“Seems like you forgetting is the problem not the store,” one user commented. In response, Gard wrote, “Yes, I am the problem. That is why this is a PSA. So if other people like me have a horrendous memory, they realize how damaging this can be.”

Other viewers jumped to Gard’s defense, saying it’s human nature to be forgetful.

“Lotta people in these comments acting like nothing has ever slipped their minds before. A $9 charge could potentially cost her a literal home,” one person said.

Another said, “So many of these comments are not passing the vibe check. First time home buyer here and doing everything right is HARD.”

Several other viewers urged Gard to contact Home Depot, citing their own experiences when companies would fix bad credit scores caused by their store credit cards.

Neither Home Depot nor Gard immediately responded to the Daily Dot’s request for comment.