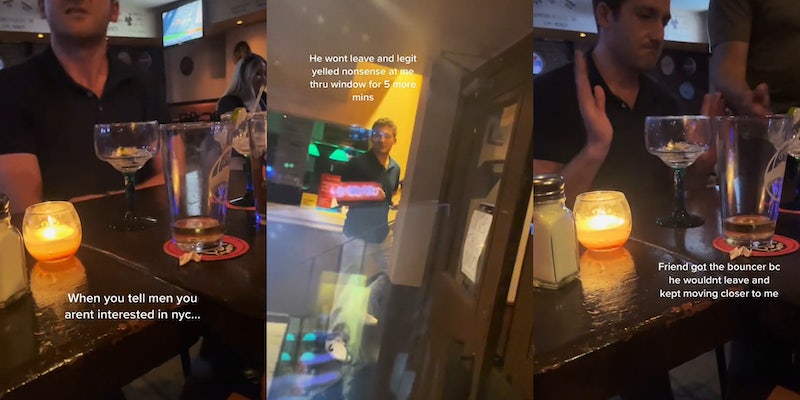 ‘Not until a man shows up does he leave, ugh’: Woman films man who can’t take no for an answer in bar

'When you tell men you arent interest in nyc...'

There are tons of stories about the dangers women face when declining men’s offers to interact while in public. Actress Jameela Jamil once said in a piece published by the Guardian that when she was 19 years old, a man “punched [her] in the face” after she turned him down.

And while an interaction shared by TikToker @playboybunnny thankfully didn’t escalate to a violent situation, it still went viral and started a conversation on the fears that many women have in just going out in public.

In the video, the TikToker interacts with a man at a bar who is speaking loudly and appears to be upset with her. The video starts with a text overlay that states: “When you tell men you arent interested in nyc…”

“I think you’re great. Can you please leave?” a woman off camera asks.

Text overlay pops up on the screen, reading, “Friend got the bouncer bc he wouldnt leave and kept moving closer to me.”

A worker comes over, and the man throws his hands up.

“Fine,” the man says before he gets up and walks away from the table. “Have a great evening.”

The TikToker then films the man speaking to her through a window as he stands in a hallway. “He wont leave and legit yelled nonsense at me thru window for 5 more mins,” the text overlay says.

TikTokers responded to @playboybunnny’s clip with unfortunate interactions of their own. Others ridiculed the behavior of the man, with some questioning what he does for a living, as the man seemed to imply the woman he was speaking to didn’t approve of his line of work. The TikToker specified he works in “sales” in the comments section.

Some pointed out that the TikToker’s video shows how “no” is sometimes not enough to dissuade some men, which is one reason why many women come up with excuses or try to play nice when speaking with them.

“wHY dOnT YoU JuST sAy No?” one commenter mocked.

“Not until a man shows up does he leave , ugh,” another pointed out.

Healthday reported that sexual abuse and violence perpetrated by men against women “is rampant in bars.” In a March 2014 piece, the outlet stated: “Men drinking in bars often feel free to get grabby, make lewd remarks and otherwise sexually harass women who aren’t interested. And many of these guys can’t take a hint when women try to move away from them, a new study shows.”

The Daily Dot reached out to @playboybunnny via TikTok comment.