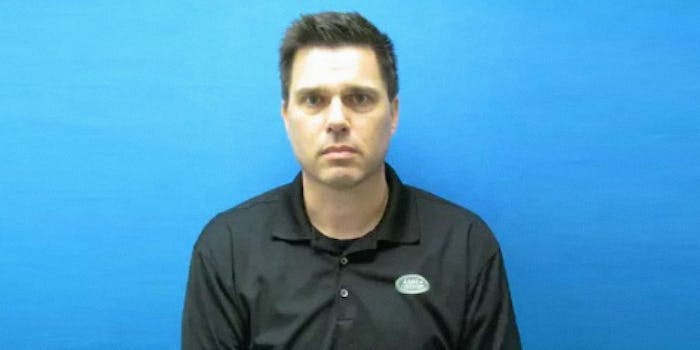 Be careful who you give your phone to.

You’ve probably heard a horror story or two about car salesmen, but this one is surely one of the strangest: A car salesman in Texas has been accused of stealing nude photos from a costumer’s phone and forwarding them to a swingers’ website.

Tim Gautreaux, a 29-year-old pastor at Hope Fellowship in Frisco, Texas, was looking to buy a new Prius in January 2015. He saved his pre-approved financing document and a pay stub on his phone, but when it came time to sign paperwork, the sales director, Matthew Luke Thomas, said he needed to borrow the phone to show it to his manager.

When he returned, Gautreaux tried to access his pay stub but noticed that an old photo of his wife, Claire, getting out of the bathtub had recently been accessed. Using an app that backs up his emails, he later found that the photo had been sent to an address reportedly linked to Thomas’ account on a swingers site.

“This private moment that was intended to remind us of our happiness together was ripped away and replaced with fear and uncertainty,” Gautreaux said in a written statement Thursday.

Thomas, 44, was charged with computer security breach, a class B misdemeanor in November 2015 and was released on bond.

Last week, Tim and Claire Gautreaux filed suit against Thomas and both Texas Toyota of Grapevine and Toyota Motor North America, alleging intrusion and breach of contract, among other things.

“Were it not for the app that he had, he would not have known what happened to the photographs or that they had been viewed and forwarded,” the couple’s lawyer, famed attorney Gloria Allred, said.

Dallas Morning News was unable to reach Thomas or the dealership for comment.