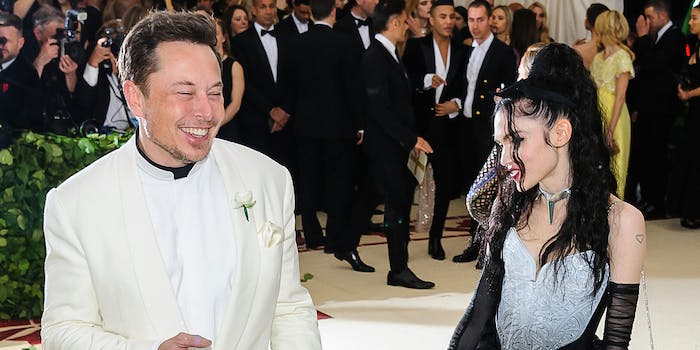 'Please turn off your phone.'

Grimes told her partner, Tesla and SpaceX CEO Elon Musk, to turn off his phone after he tweeted that “pronouns suck.” Then, she deleted her callout.

Musk sent the tweet on Friday evening. It is still live and came hours after he tweeted, “Twitter sucks.”

Grimes responded to the tweet minutes later—which many viewed as being transphobic—and told him to stop and to call her.

“I love you but please turn off ur phone or give me a dall [sic]. I cannot support hate,” she wrote in the now-deleted tweet. “Please stop this. I know this isn’t your heart.”

Musk hasn’t made any further comments or clarifications on the intentions behind his tweet. And Grimes, whose real name is Claire Boucher, did not elaborate on her criticisms.

Pronouns—words like “she,” “he,” and “they”—have been increasingly discussed as of late as LGBTQ activists and workplaces put a bigger emphasis on asking people’s preferred pronouns.

It’s unclear if people’s own pronouns were what Musk was referring to—but many Twitter users interpreted it that way.

In May, Musk and Grimes welcomed their first child together, named X AE A-XII Musk. When asked in February whether the baby was going to be a boy or a girl, Grimes replied, “They may decide their fate and destiny.”