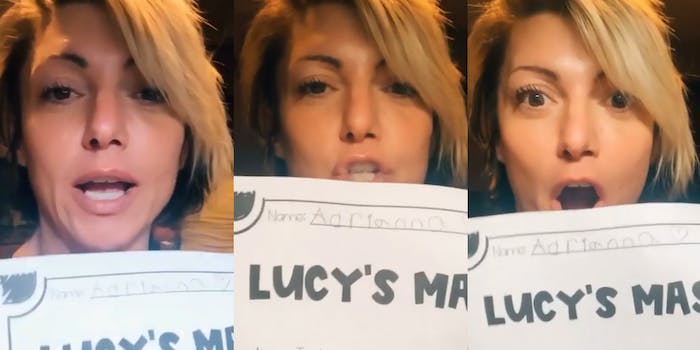 'Not only are these children forced to wear a f*cking mask, they have to do stories about how it's normal.'

A New York-area “Grandma Karen” flipped out after learning her granddaughter’s elementary school was teaching them about wearing masks.

The video, uploaded to Reddit’s “Fuck You Karen” subreddit on Wednesday where it’s since gone viral, shows her granddaughter’s worksheet, showing a colored-in mask, with some writing above it.

“Not only are these children forced to wear a fucking mask, they have to do stories about how it’s normal,” explains the woman, clearly disgruntled, with her Karen hair swaying in the air-conditioned wind.

“It’s not fucking normal people. Wake the fuck up,” she urges.

She says she’s going to fight against it, asking if any other New York parents are willing to join in a fight, ostensibly against teaching children how to protect themselves and others from a pandemic. The Karen even goes as far as to call the school’s actions “a disgrace.”

Masks are “strongly recommended” to be worn while in schools in New York state, including the New York City area, except for children with official medical exemptions. Many teachers are questioning if the state government is doing enough to protect them, given the guidance can change from district to district.

At the end of the video, with the most straight-out-of-central-casting “New York City” accent available, the Karen throws of a dichotomous peace sign, while yelling, “Trump 2020, motherfucker! Fuck outta here!”