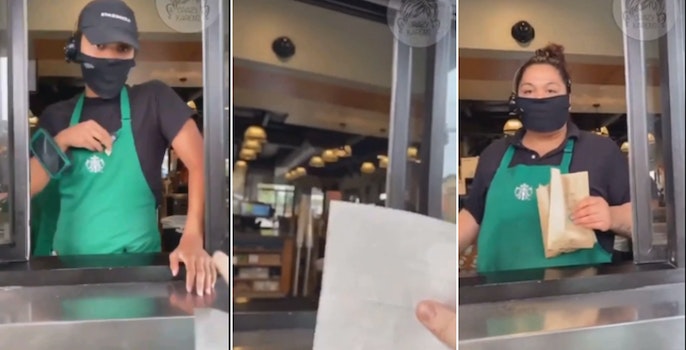 Starbucks Karen just wants some water and cake pops. But she won’t wear a mask

A serial “Starbucks Karen” Amber Lynn Gilles is back on the loose in San Diego, with a recent viral video of her threatening to sue a Starbucks location after she’s refused service for not wearing a mask.

Gilles approached the Starbucks drive-thru for water and cake pops. As the doors open, the masked employee asks if she has a face mask. Gilles, managing to both film and hold out a small doctor’s slip, replies, “I don’t, and I have a medical exemption.”

The employee walked away and came back with the pops, apparently assuming Gilles would put on her mask when she arrived. Evidently looking for a confrontation and armed with misinformation, Gilles did not don her mask.

“Wow, they just shut the doors, they won’t even serve me,” she says.

The employee asks if Gilles is recording. She responded that she is “live.”

“I’m sick of being discriminated against, and I don’t have a mask.”

But then she says she does have a mask, and also a “medical exemption,” and then promptly drops the piece of paper, forcing her to get out of the car to retrieve her golden ticket.

The employee shut the drive-thru doors as the COVID denier approached to keep a distance from her. Gilles turned it up a notch, raising her voice and demanding the employees’ names at the location—and claiming discrimination to the manager.

“Are you aware of California 51 A?” Gilles asked, before providing a broad reading of the Unruh Civil Rights Act, without other state-guided context related to COVID and mask-wearing.