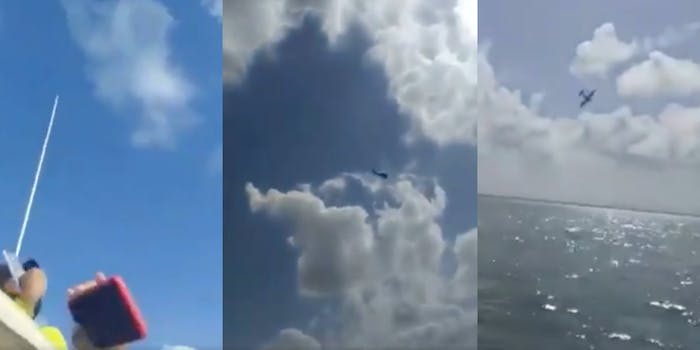 One attendee reportedly joked before the accident: 'It’s all good as long as it doesn’t end up crashing into us!'

Two pilots reportedly died in a plane crash during a “gender reveal” party in Cancún on Tuesday. The fatal crash was caught on camera.

In a now-viral video of the incident, a plane can be seen flying above waters as attendees of the celebration watch from a boat. The plane was waving an “It’s a girl” banner, according to the Hill. “It’s a girl!” the guests scream, according to translations by the Sun.

Another attendee even reportedly jokes, “It’s all good as long as it doesn’t end up crashing into us!”

The attendees’ cheers quickly turn into screams, however, as the plane begins to nosedive into the body of water. “Surely this can’t be happening!” an attendee shouts as the plane goes down. The video, which was filmed by attendees of the celebration, also captures the moment the plane hits the water, reportedly killing two people—a pilot and a co-pilot—inside.

It then abruptly ends.

There may have been four passengers on the plane when it crashed, according to the New York Post. According to reports, the two unidentified pilots did not die on impact. According to La Prensa Latina, one died during the rescue mission, and the other succumbed to their injuries shortly after.

The incident occurred around 4pm local time, according to local news outlet Quequi.

Gender reveal parties have a reputation for turning disastrous, and, sometimes, even fatal. In September, authorities revealed that a gender reveal celebration was allegedly to blame for the El Dorado wildfire in California that lasted about two months, burned over 22,000 acres, and claimed the life of a firefighter. A separate gender reveal party caused a 47,000-acre wildfire in Arizona. Luckily no one died in that instance, but it did cost the border patrol agent who reportedly started the fire via an explosive $220,000 in restitution. In Iowa, a grandmother was reportedly killed after being struck in the head by debris after the family inadvertently created a pipe bomb to announce the baby’s assigned sex at birth. And during a gender reveal party in February, an expectant father reportedly died when a device to reveal the baby’s sex exploded.

These incidents have prompted calls for gender reveal parties to be banned. Jenna Myers Karvunidis, the blogger who is credited with starting the concept of “gender reveal” parties, even spoke out against them in September. “Stop having these stupid parties. For the love of God, stop burning things down to tell everyone about your kid’s penis. No one cares but you,” Karvunidis wrote on Facebook at the time, per People.