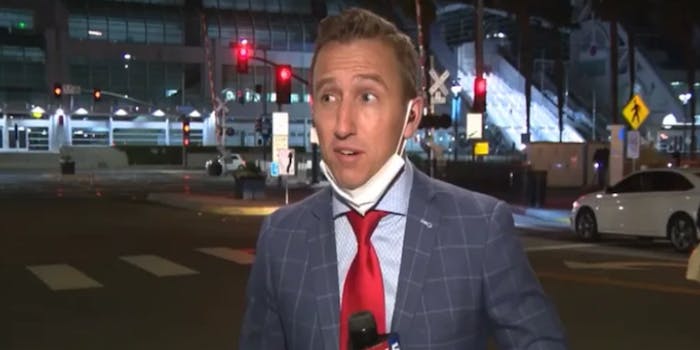 A bystander had a close call with a stray bullet.

A local Fox News broadcast was interrupted by an officer-involved shooting in San Diego, California—and managed to capture the aftermath on air.

The video shows Jeff McAdam lambasting San Diego Comic-Con for its decision to postpone an in-person convention due to the coronavirus pandemic when shots ring out.

McAdam first tries to continue reading information about the controversial decision from his phone, but he eventually moves off-screen as the camera pans to the area where the shooting took place.

The camera operator captured footage of the suspect ducking behind a vehicle, still holding a gun as the officer appeared to return fire. Eventually, the suspect walked toward the police vehicle with his hands in the air.

According to accounts pieced together from the KSWB-TV crew and the Harbor Police Department, it appears the suspect ran a red light and was pulled over by a police officer shortly before the KSWB-TV newscast began.

The officer was concerned that the suspect was under the influence of drugs or alcohol and asked him to step out of the vehicle, which is when the man reportedly pulled out a gun and began firing.

Neither the officer or the suspect were injured in the shootout, but a random bystander was saved from injury when a stray bullet struck the glasses case in his back pocket.

The suspect was taken into custody shortly after opening fire when the officer who initiated the traffic stop received backup.