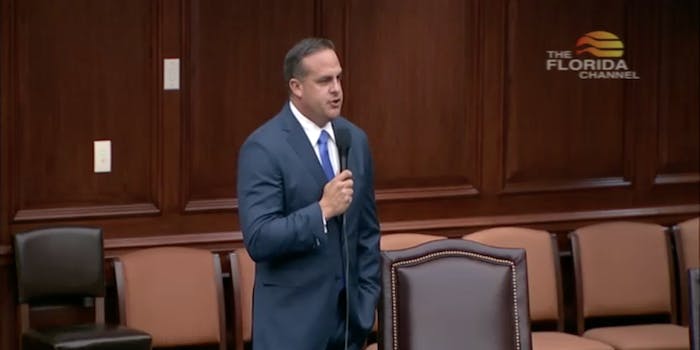 Two organizations want him to resign, but he's not backing down after his insult tirade.

Appropriating the N-word in any context is horrific, but one Republican state senator from Miami is being called on to resign after using the word and several sexist slurs while speaking to two black senators.

The Florida Democratic Party and the Florida Legislative Black Caucus are calling for the resignation of Sen. Frank Artiles after he referred to six white senators as “n—–s” and called one a “pussy” while complaining about GOP leadership in front of two black colleagues, Democratic senators Audrey Gibson and Perry Thurston. He also called Gibson sexist insults when called out on using the slur.

According to the Washington Post, the insult tirade happened on Monday night, when the three were having drinks at a members-only Governor’s Club near the capitol. Artiles called Republic Senate President Joe Negron a pussy, saying he was only elected because “six n—–s” voted for him.

Artiles then attempted to defend his use of the word because he pronounced the word with an “-as” ending instead of “-ers,” and was from a Hispanic-heavy working class city. Artiles then told Gibson to stop acting like a bitch. The Tampa Bay Times also reported that Artiles also used the phrase “fucking asshole,” either referring to Gibson or himself.

According to POLITICO, Thurston urged Artiles to apologize, but the Republican senator dodged a meeting Thurston arranged for the following morning, saying he had bills to present. Artiles later acknowledged he should have attended the meeting.

Artiles issued an apology in a statement to the Miami Herald on Tuesday, and formally apologized for his comments on the Senate floor on Wednesday morning, speaking directly to Thurston, Gibson, and Negron. After his apology, however, Artiles attempted to make an excuse by explaining that he grew up in a diverse community where people shared their customs and “slang,” but realized that the Senate was no place for the “looseness of words.”

“There is no excuse, nor will I offer one. My comments to you are the most regretful of all because they injured you personally. No one deserves to be spoken that way, much less a person of your stature, dignity and integrity,” Artiles said toward Gibson, reading from a prepared statement. “I humbly ask [you] to accept my heartfelt apology.”

For Thurston, however, the apology wasn’t enough. According to the Times, three hours after Artiles’s statement on the floor, the senator filed a formal complaint on behalf of the Florida Legislative Black Caucus asking for the Republican’s expulsion.

“The shadow he has cast over our chamber deserves the most severe punishment available,” Thurston wrote to Republican Sen. Lizbeth Benacquisto, the head of the senate committee dealing with Artiles’s misconduct.

Artiles, a former Marine reservist, has previously been caught using racial slurs in 2014, when he was recorded using a slur for Muslims.

POLITICO reports that Republican leaders were “horrified” with Artiles’s comments, but have remained silent—even Negron has said Artiles’s response to the resignation calls is up to him, since he’s apologized and has “resolved” the issue with senators involved.

As for Artiles, he told reporters he is “absolutely not” resigning, and said he’ll soon file for his 2018 reelection.

“There is a firestorm, and it’s an unfortunate circumstance,” Gibson said. “But words have consequences in no matter what setting you’re in.”

Update 1:21pm CT, April 21: After formerly telling reporters that he would not concede to calls for his resignation, Sen. Frank Artiles resigned from the Florida State Senate on Friday morning. According to the Washington Post, Artiles announced his resignation in a letter to Senate President Joe Negron, the senator he said was elected by six “n—–s” while chatting with two black senators. In his resignation letter, Artiles wrote he needed time for personal reflection and growth, the Miami Herald reported.

“It is clear to me my recent actions and words that I spoke fell far short of what I expect for myself, and for this I am very sorry,” Artiles wrote. “I leave this office knowing that despite my shortcomings, I have fought hard to change the status quo while remaining true to myself … I will discover ways to continue to serve my community in the future.”