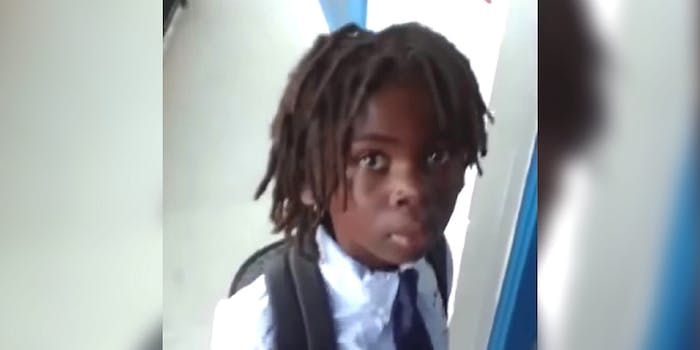 They told him to cut his hair, or leave.

The first day of school is always the most exciting—new teachers, new classmates, and a fresh outfit to make your best impression. But a Florida private school stopped a first-grader from attending his own first day, when they told his father that he couldn’t come to class because he has dreadlocks.

According to WESH 2 News, Clinton Stanley was taking his son, 6-year-old Clinton Jr., to A Book’s Christian Academy in Apopka, Florida, when they were turned around. According to the school’s handbook, all boys must have their hair cut above the ear. Clinton Jr. has dreadlocks and was told by the school’s administrators that he could either cut his hair or be unenrolled and miss the first day of school.

In a video Stanley took of the interaction with school officials, he asks if he can braid up his son’s hair, to which they say no. He then begins telling himself to stay calm before talking to the administration again to withdraw his son from the school. The video was shared by Shaun King on Wednesday and has since been viewed more than 1 million times.

This is absolutely infuriating.

This sharp young Black boy, clean as ever, gets kicked out of school because he has dreads.

His father rightfully struggles to maintain his emotions at the disappointment of it all. pic.twitter.com/WOpUGLqg8l

“If a kid has dreadlocks, that’s your personal standard. Meaning, that’s a personal problem you haven’t overcome, because 95 percent of the kids who have dreadlocks are African American,” Stanley told local news station WESH 2 News.

The school’s director, John Book, denied the sentiment that the dress code policy has anything to do with race, telling the station that he’s “obviously not a racist” because a majority of the children who attend the school are Black.

Despite this, it seems that A Books denies a majority of their male students the ability to wear cultural hairstyles that fall below the ear. A Books is far from the only school, or institution, for that matter, that denies the participation of Black people who wear their hair in cultural hairstyles, or naturally. And while it is a private school that is allowed to employ its own dress code standards, A Books’ rules seems to perpetuate the same idea as these other institutions—that Black hair, and Black culture as an extension, has no place in academia or professional settings, unless it follows European standards of grooming.

While Clinton Jr.’s first day of school ended before it even began, his father was able to enroll him in another school that would treat him and his hairstyle of choice with respect. And so, for the second day of school, Clinton Jr. got to wear his dreadlocks—this time, in a mohawk.

Here's Day #2 of the first day of school for this young king.

Thankfully a new school welcomed him, his style, and all of his hair – with open arms. pic.twitter.com/ryOYnTlMYQ