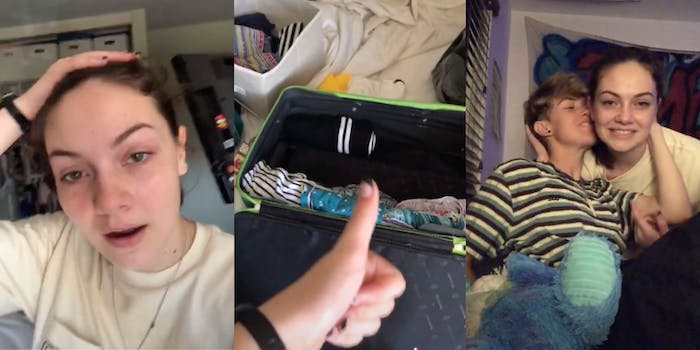 ‘Broke my heart’: TikTok video shows father threatening to disown his daughter because her boyfriend is trans

'I cannot believe in 2021 this is still happening.'

A teen’s distressing TikTok is breaking hearts across the platform, as viewers are provided a brief glimpse into the girl’s homophobic household.

User @enoblehere, who goes by Elyse on the platform, uploaded several recordings of her and her parents talking on June 5. The simple videos provide an excruciating window into her world in the moments after she told her parents she’d fallen in love with her trans boyfriend. Their horrifying reactions are sparking a conversation about acceptance, found family, and homophobia.

The videos went promptly viral, earning more than 2 million views between the two of them. The drama eventually spread to Twitter as well, where it’s been collecting likes and comments from upset viewers.

The first of the recordings is much shorter than the second. It begins with Elyse’s father vehemently denying that her boyfriend is a man. He states, in scathing tones, that “he is not a boy.” As Elyse attempts to explain that her boyfriend simply “hasn’t started testosterone yet” and that the two could “have a family” someday, she is met with rage and dismissive exasperation from her father.

Her father uses the idea of “choice” against his daughter on several occasions. He uses it as a way to shame her for her “choices,” accusing Elyse of having “a choice, but this is not the right choice. And you know that, down deep inside.”

In part two of the recordings, things escalate further. Elyse informs her parents that she and her boyfriend have been in a relationship for around “seven to eight months,” and her father places the blame for his decision to reject his daughter on her shoulders, rather than accepting it for himself.

Elyse’s parents accuse their daughter of jumping on a trend, rather than actually caring for her boyfriend, as she pleads with them to listen to her. She desperately tries to explain, but her father bowls over her time and again. He tells her that she put a “major major wall between us” and uses religion as a weapon against her.

It is clear throughout the recordings that Elyse’s parents see it as an “us or them” situation. They do not entertain the notion, for a moment, that Elyse could have both a trans boyfriend and a supportive family. If she refuses to reject her boyfriend, along with the part of herself that loves and accepts him, they say she is turning against her family.

It becomes clear, not far into the recordings, that Elyse’s parents intend to kick her out if she doesn’t adhere to their demands and break up with her boyfriend. Their words additionally make it known that she will need to reject any piece of herself that doesn’t fit into their restrictive worldview.

Elyse is remarkably mature throughout the interaction, despite the clear devastation in her voice. She tells her parents that she knows “this relationship won’t last forever.” Her heartbreak is clear as she tells them she “just wanted to tell you about it; he’s amazing.”

In the background, Elyse’s mother can be heard quietly asking if Elyse really thought her parents “would support it.” She goes on to say that, since no one is “holding a knife” to her throat forcing her to “be his lover,” Elyse should abandon her feelings, her boyfriend, and her truth to adhere to her parent’s demands.

Near the end of the second recording, her father makes it clear that Elyse will be out a home, as well as a family, if she doesn’t reject her boyfriend. He attempts to frighten her with this fact, noting the increased “expenses” that will be on her plate, along with extra responsibility. When she pleads with her father to listen, he soundly rejects her.

A number of commenters zeroed in on Elyse’s father framing the situation as his daughter’s choice, rather than his own. They noted that “they are choosing this. This is their fault.”

One person told Elyse to “definitely choose” her boyfriend over her family. “If they’re making you choose, choose anyone but that family.”

Other commenters were horrified by “the amount of hate in your parents’ hearts.” They called her father a “cruel and evil human being” for treating his daughter so poorly, and encouraged her to “find your family.”

Viewers shared their heartbreak over Elyse’s situation, doing their best to comfort her from behind a keyboard. “The sobs broke my heart into a million pieces,” one commenter wrote. “I’m so sorry this happened.” They invited Elyse to “reach out” so that they can “support you with open arms.”

In the end, it appears that Elyse’s parents really did kick her out. Several other uploads see Elyse packing her things and introducing viewers to her boyfriend. She doesn’t say where she will be staying, but she does note that she packed as many of her possessions as possible before heading out.

Wherever she’s staying, Elyse already seems to be in a better place. A video of her and Ash, the boyfriend in question, seemingly shows the two quite content. Elyse informs viewers that she’s been kicked out for “being with a trans man” and signs the video off with an extremely fitting “happy Pride month everybody!”

Viewers, though still heartbroken for Elyse, were delighted to see her thriving with her beau. They pushed her to accept that blood doesn’t always equal family, and members of the LGBTQ+ community flocked to welcome her with open arms.

We reached out to Elyse.