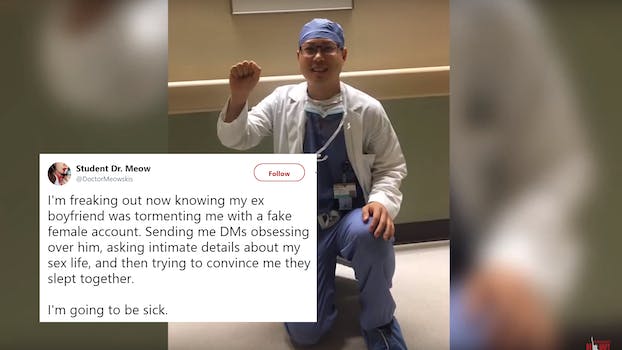 #MedTwitter users are rallying behind the woman.

Eugene Gu, the doctor famous for successfully suing President Donald Trump for blocking him on Twitter, has been accused of sexual assault by a woman who says she’s his ex.

The woman, a medical student who goes by the username @DoctorMeowskis detailed her months-long relationship with Gu in a Twitter thread on Wednesday. She said that in addition to sexually assaulting her, Gu spent months impersonating a woman and talking to her through a now-deleted fake account.

According to @DoctorMeowskis’ posts, she and Gu developed a relationship after Gu found her through #GirlMedTwitter, a hashtag @DoctorMeowski created to empower women in the medical field. Gu began texting her frequently and said they would be Twitter’s “power couple.” @DoctorMeowskis said that because of her recent breakup with an emotionally distant ex-boyfriend, she felt comforted by Gu’s affection and attention.

She described his obsession with Twitter and the beginning of his controlling behavior.

At the same time, @DoctorMeowskis began receiving messages from a woman named Mary Laury who claimed to be a surgeon. Things with Laury soon became “really weird.” Laury was obsessed with Gu and had “printed [Gu’s] photo and put it on her wall to admire.” Laury also asked for intimate details about  @DoctorMeowski and Gu’s relationship. Laury made @DoctorMeowskis feel “uneasy.” Laury also claimed to know Gu in real life.

@DoctorMeowskis said she continued communicating with Gu, who frequently complained about his job at the Vanderbilt University Medical Center. She said she advised him to stop posting about his job. (Gu was released from the center earlier this year due to issues concerning his “work performance and professionalism,” though he claimed he was fired for speaking out against white supremacy.)

After a couple of months of talking, Gu invited the @DoctorMeowskis to visit him and said she could shadow him at work, according to her posts.

@DoctorMeowskis said she spent the next few days in his apartment and finally had the chance to go out on a date with him on Valentine’s Day.

The two returned to his apartment, where she said he forced himself on her.

@DoctorMeowski said the next morning Gu made no mention of the previous night and instead gushed about how excited he was for her to meet his mom. She said she returned home and began receiving “intense” messages from Laury about her sex life with Gu.

Gu made comments to her about being her future husband and later made plans to visit her but backed out, claiming he was called into court. After she doubted his excuse, he blocked her.

Laury then reached out to @DoctorMeowskis that Gu was upset and that she was going to fly to see him.

The following day, Laury sent @DoctorMeowskis “disgustingly graphic details” of Laury and Gu’s meetup, which Gu denied. @DoctorMeowskis told him that they were better off friends. He responded by bragging about his new girlfriend, who was “younger” and “had lots of Twitter followers.”

Gu’s Instagram account shows an apparent girlfriend who appears in multiple photos with him from April 3 onward.

@DoctorMeowskis posted screenshots of her conversations with Laury and said she never blocked her because her account “legitimately scared” her. @DoctorMeowskis did not respond to the Daily Dot’s request for comment.

Though @DoctorMeowskis never directly named Gu in her thread, an earlier tweet implied that he was the ex-boyfriend in question. Gu, who is known as a prominent liberal social media activist, maintained his innocence in a tweet alluding to the woman’s accusations and claimed that he was being targeted for “speaking out.”

Since speaking out, I've been falsely accused of selling baby parts, murder, wife beating, false imprisonment, and more. After taking the knee to fight racism, I was fired. My private life has been distorted and miscontrued—with many falsehoods taken as fact. But I am innocent.

He also sent messages about @DoctorMeowskis’ post to Kelly Ellis, a software engineer, who voiced her support for the woman. She said that he sent her and other women “conflicting stories” about the allegations. Gu did not respond to the Daily Dot’s request for comment at the time of this posting.

He's DMed me about it. pic.twitter.com/J8VvgiE9ZP

Here's another screenshot I took just now with the current time displayed on my phone. And the notification about my flight later today. I'm not making this up. pic.twitter.com/L4hlQB4qgD

Several users also accused Gu of using the Mary Laury account to attack those who disagreed with him. In one incident, Laury accused a user who goes by Dr. Glaucomflecken, an ophthalmologist and writer for GomerBlog, of racism.

For those not following: @DGlaucomflecken was accused of racism because his avatar is an ophthalmoscope dressed in a top hat. His accuser was @marylaurymd which turned out to be a dummy account that @eugenegu used to harass @DoctorMeowskis (whom he assaulted in real life). https://t.co/RE0hT19uZR

I’ve done extensive searching. That person is a creation of Eugene Gu. He’s had varying interactions with an account that has changed names from Margaret lau to Mary lau to Mary laury over the year. None of those are physicians or even residents, and this goes back to Jan 2017. pic.twitter.com/82yvhNOe9p

1. @eugenegu did you fabricate the Mary Laury, MD account and use it to prop up your personal account?

The Chronicle, a student newspaper at Duke University, published an article Wednesday morning revealing that Gu’s ex-wife was granted a temporary domestic violence restraining order against him in 2015. Gu denied the claims of domestic abuse and told the news outlet that his criminal records had been expunged. This news came weeks after Donald Trump Jr. sent out a tweet calling the doctor a “wife beater.”

Update 7:00am CT, July 12: In a long Twitter thread Thursday morning, Gu responded to the allegations and told his “full side of the story.”

His gives a different version of the events that transpired when @DoctorMeowskis came to visit him, including saying she made unwanted sexual advances toward him and that he slept at the hospital several of the nights she was in town to avoid being in bed with her.

Later in the thread, he concedes to using the Mary Laury account to DM the woman. He says, “In hindsight this was immature of me and I regret the way I used it,” but explains he used it to corroborate details of a trip he’d made up.

Gu includes screenshots of a text message thread with a contact labeled Laurazapam  (who he says is @DoctorMeowskis) as evidence “she would still proposition me for sex in very uncomfortable ways.”

He says their last correspondence was a text of “???!?!?” after Donald Trump Jr. accused Gu of domestic violence.

The thread concludes with his assessment of the #MeToo movement: “It’s about all human beings who are victimized by sexual assault or sexual harassment. Men can be victimized by women too.”

In summary, the #MeToo movement is not about women vs. men or men vs. women. It’s about all human beings who are victimized by sexual assault or sexual harassment. Men can be victimized by women too. And false accusations without due process is a weapon of terror.

The thread begins here. Gu says he’s shared all the relevant text messages and voicemails with a Washington Post reporter.

This story has been updated for clarity.