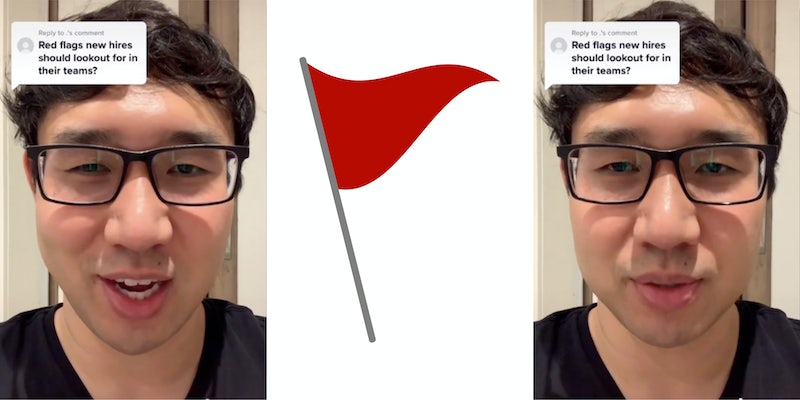 'The entire reason they needed new hires was because everyone was leaving the company.'

A former software engineer for IBM and Netflix has gone viral after sharing “red flags” from his time interviewing at and working for various companies.

In the first tip, TikTok user Frank (@frankniu) tells a stunning story from his time interviewing at Etsy, warning that if others encountered the same situation, they should reconsider working for that company.

“I remember [during] my interview at Etsy, half of the people who were interviewing me were actually quitting,” Frank recalls. “The entire reason they needed new hires was because everyone was leaving the company.”

In the video, it’s unclear when Frank had his Etsy interview. In the mainstream media, Etsy is known for its forward-thinking business philosophy, listing among its values that they are a “mindful, transparent, and humane business” and that they “keep it real, always.”

Forbes heralded the company as “a workplace that works for everyone,” citing the company’s near-parity gender balance among employees. Review sites like Glassdoor are equally rosy about the company, with 92% of reviewers saying they would recommend the job to a friend.

Naturally, not everyone’s experience at the company has been positive. Reviews on Glassdoor from the company’s early years cite poor management and low hiring standards among the issues present around the mid-2010s.

In 2017, one Glassdoor review claimed that there was a “massive attrition of employees in [the] last four months beyond the two big layoff rounds.”

“Backfills are not keeping up and it’s even harder now to attract the talent that the company desperately needs like data science, search, and other engineering needs,” wrote the reviewer.

Today, however, reviews seem to have stabilized to a relatively positive level.

In comments, users offered their own interview red flags.

However, some said that sometimes, people just need money, red flags notwithstanding.

As one user wrote, “Those red flags are pretty yellow when $2000 of rent is due in just a few weeks.”

The Daily Dot reached out to Frank via email.