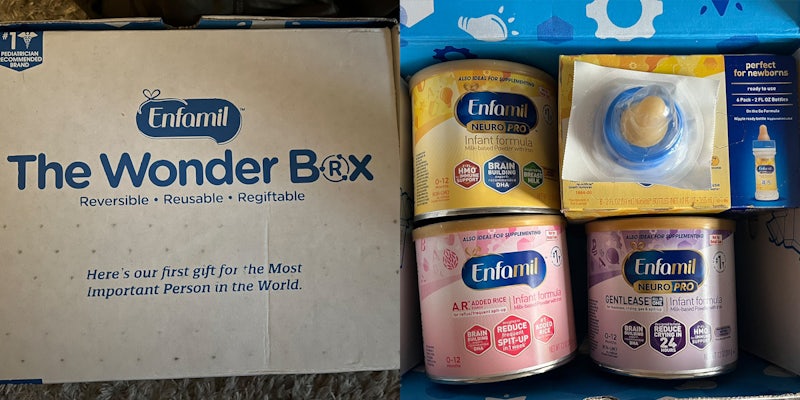 ‘Enfamil is sending out formula all willy-nilly based on the data you clearly sold them’: Woman mailed baby formula after buying Walgreens pregnancy test

'Are you trying to make a political statement or is this just a big money grab?'

A woman on Twitter says that she was mailed baby formula after purchasing a pregnancy test from Walgreens without ordering or buying the formula.

On July 16, Nicole (@melancholynsex) tweeted that she received a package of Enfamil baby formula from Walgreens a week after purchasing a pregnancy test at the store. Nicole clarified that she was asked to take the test by her doctor—”despite having no fallopian tubes.” On Monday, Nicole’s tweet had over 150,000 likes and almost 30,000 retweets.

Nicole continued to explain on her Twitter that she thinks that because she used her Walgreens reward card to purchase the test, the package was sent to the address listed rewards account. She also tweeted that she believes that Walgreens is selling Enfamil its customers’ data, such as her purchase of a pregnancy test.

“THERE IS A FORMULA SHORTAGE, and yet @Enfamil is sending out formula all willy-nilly based on the data you clearly sold them,” Nicole tweeted. “Shame on you @Enfamil.”

She also brought up that in states where abortion is now illegal, women purchasing a pregnancy test might feel pressured and surveilled if they were to receive an unsolicited box of baby formula.

“Are you trying to make a political statement or is this just a big money grab?” Nicole tweeted.

Nicole’s experience with her data being allegedly sold to Enfamil is just the latest in a series of apps and retailers receiving backlash for privacy concerns after Roe v. Wade was overturned: Privacy experts advised people who use period-tracking apps like Flo and Clue to consider that data surrounding their menstrual cycles might be at risk. And in early May, a woman says she was asked for her driver’s license to purchase a pregnancy test from Amazon.

On Tuesday, the Federal Trade Commission said it would use “the full scope of its legal authorities” to combat companies exploiting customer’s health data.

“I am aware that our data is bought and sold, especially through the use of rewards cards,” Nicole tweeted in her thread about the Enfamil package. “But this is a lot bigger than sending me a coupon in the mail.”

Many of the responses Nicole received to her Twitter thread included people sharing their experiences with strange solicitations that they think are related to their data being sold.

“I received a package like this over a decade ago while I was going through a miscarriage. It still bugs me. I wrote letter to the manufacturer. Never got a response,” @og_hellraiser wrote to Nicole.

“My nine year old son goes to get the mail and comes in with a can of Baby formula. He then asks if there is something I’m not telling him. That is how my son found out he was going to be a big brother,” @woltersrobin tweeted. “This was not how I planned on telling him.”

“Less than 48hrs after my daughter was born.. I got a call from a bank to set up a savings plan for her,” @pprussel14 replied. “We hadn’t even told all the family.”

Others connected the alleged data selling to potential prosecutions of abortions in states where the procedure is now illegal.

“So now we have to use cash to buy pregnancy tests? This is what we have come to,” @thebart33 wrote in response to Nicole’s tweets. “If they sell your info to @enfamil, what is preventing them from giving it to the state in red states so they can monitor you?”

“So much for the days of a trusted pharmacist,” @mbdevolldd wrote.

The Daily Dot has reached out to Walgreens and Enfamil via email, and contacted Nicole via Twitter.

Update 5:00pm CT, July 18: In a statement to the Daily Dot, a spokesperson for Walgreens said the company “does not provide individual customer purchase information to Enfamil.”

“The privacy of our customers is important to Walgreens,” the statement said.