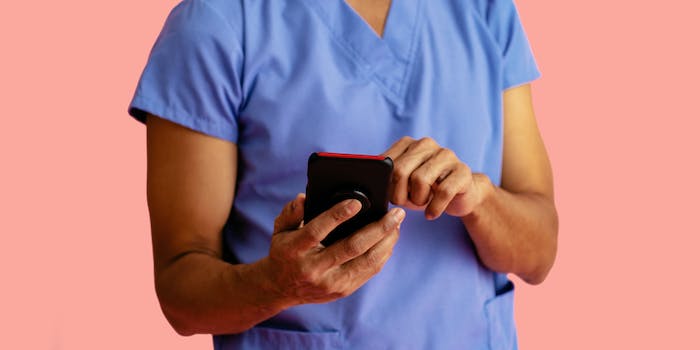 A woman says in a viral video that a letter circulating in at least one Texas hospital instructs nurses to report patients who are experiencing possible side effects of abortion. The letter lists side effects including “allergic response,” “cardiac arrest,” “respiratory arrest,” and “death.”

The TikTok was reposted by @whiskeycreekunique, who says that the original video was taken down. In the video, a woman says that nurses at a Texas hospital received an email “outlining all of the expected” side effects that might occur when someone goes to a hospital after having an abortion.

The TikToker says the email tells nurses they must report anyone showing any of the listed side effects within three days of treatment to Texas Health and Human Services.

“Holy shit, this is real,” the TikToker says through tears. “And they’re going to come after our [medical] licenses.”

Commenters on @whiskeycreekunique’s repost of the video referenced HIPAA, or the Health Insurance Portability and Accountability Act, which “sets limits” on who can look and receive information about a patient’s medical records, and asked if HIPAA would protect people seeking an abortion from being reported.

Stat reports that HIPAA wouldn’t protect someone who may have had an abortion from prosecution: “If there’s a warrant, court order, or subpoena for the release of those medical records, then a clinic is required to hand them over.”

@whiskeycreekunique commented, “Apparently there is no HIPPA LAWS for women now.”

Another TikToker, @mandarr.swiftie, says that they found phrasing similar to the email in the Texas Administrative Code. The code states that “abortion complication” is defined by many of the same side effects, including an allergic reaction, uterine perforation, cervical laceration, infection, sepsis, and shock. The list of side effects in the Texas Administrative Code is shorter than the list shown in the alleged email.

User @mandarr.swiftie also points out that Texas Health and Human Services has abortion reporting forms available to the public on its website. The forms, which are intended for physician use, include reports for induced abortion, medical emergency abortion, third-trimester abortion, and abortion complications.

“My guess is that the documents from the first video are the ‘new roll out’ info that providers are giving now that Roe has been taken down,” @mandarr.swiftie commented on their video about the Texas Administrative Code.

In a phone call, Sam Taylor, assistant secretary of state for communications at the Texas State Department, which publishes the Texas Administrative Code, directed the Daily Dot to Texas Health and Human Services.

Texas Health and Human Services did not immediately respond to the Daily Dot’s request for comment.

Weldon pointed the Daily Dot to the Texas Health and Safety Code, which includes a list of abortion complications similar to the list shared in the TikTok. The code directs medical providers to report complications within 30 days.