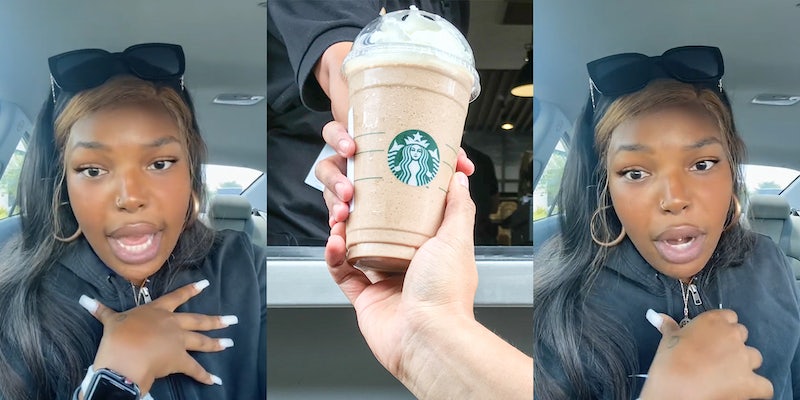 ‘Give the money to the people who actually need it’: Former Starbucks barista shares hack to end ‘pay it forward’ line in drive-thru

'As a Starbucks employee, THIS IS WHAT WE WOULD LOVE.'

In a viral video posted Aug. 4, a former Starbucks barista, Tiffany Wyatt (@tiffanycuh), stitched a video regarding the “ponzi scheme” that is a Starbucks “pay it forward” line. The concept of pay it forward has been around for years: the person in front of you paid for your drink, so you pay for the one behind you.

Wyatt suggests another way to pay it forward that actually benefits the baristas, the ones making the drinks. Her video has over 2.4 million views.

“Okay, I know TikTok loves their Starbucks hacks, so here’s a hack for whenever you get caught in one of those stupid pay it forward lines,” she says.

Once customers get to the window, Wyatt advises them to clearly state they do not want to pay for the person behind them. Instead, she suggests customers take the money that they were going to use to pay for their drink and tip the barista “as they deserve.”

“That way the pay it forward line is broken, the barista is happy they have their tip, and you have a free drink,” she concludes. “And, your barista will probably like you a little bit more.”

In the comments section, viewers debated over this hack.

“It’s not a free drink if you’re ‘tipping’ for it,” one user commented.

“​​As a Starbucks employee, THIS IS WHAT WE WOULD LOVE,” another said.

“Trust me the drive through workers hate them as much as the customers. It makes things more difficult to keep track of them,” a third user stated.

Wyatt further clarified her reasoning for the hack in a comment.

“My entire point is give the money to the people who actually need it like the baristas & not ppl who was going to spend money anyway,” she said.

The Daily Dot reached out to Wyatt via Instagram direct message.