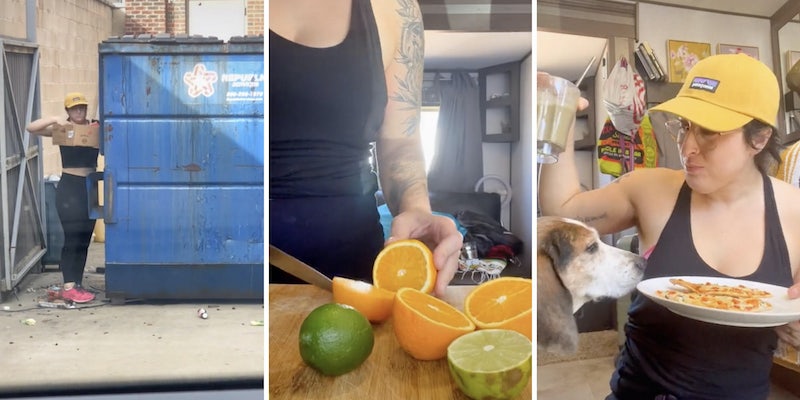 ‘I eat healthier than I did before’: Dumpster diver creates meals out of food she finds in trash, sparking debate

'This is why I DON'T EAT AT EVERYONE'S HOUSE.'

A dumpster diver on TikTok is creating meals out of food she finds in the trash, sparking debate in the comments of one of her most recent videos.

User @jillian_rn4 has a series on the platform called “trash food,” where she makes meals from food she finds while dumpster diving.

“Something that I tell people is that since I’ve started dumpster diving, I actually think I eat healthier than I did before,” she says.

This installment shows her making a smoothie from fresh oranges and limes she found in the dumpster with frozen bananas and pineapple she found on previous dives. She also adds oat milk and hemp protein powder that she purchased.

“I drink a fresh fruit smoothie probably every day because the food that I find most is typically fruit that is just a tiny bit too ripe for purchasers. Maybe there’s a bruise or two, but it’s great frozen in a smoothie,” she says.

The TikToker also cooks a frozen cauliflower crust pizza she found for lunch.

“At the time that I found it, it was actually still cold, still frozen, and good to go. The expiration date is like a year from now. I don’t know why it was thrown out. I don’t really care, it was delicious,” she says.

The video received over 2.6 million views and sparked debate about dumpster diving in the comments.

Several users criticized the food safety of eating food from the dumpster.

“And this is why I DONT EAT AT EVERYONES HOUSE DAYUM,” one user said.

“Bro that’s not fresh … they throw it away for a reason…,” another said.

One user warned against recalled products that get thrown away. “Product recalls also go in these, you could get seriously ill from apparently fine food,” they said.

The TikToker responded, saying that she always checks product recalls to ensure the food she eats is safe.

However, many others praised the dumpster diver, noting how much food grocery stores throw out.

“Y’all know how much food stores throw away because they have to & they’re not even bad?” one user said.

“I work at a grocery store and we honestly throw stuff that’s not even expired or bad. so I mean I honestly don’t see anything wrong with this. go you!” another said.

“ALSO once you work at a grocery store, your jaw drops at the POUNDS of fresh food they throw away. Need to see to believe,” a third user said.

A few users shared their own experiences picking up food that has been thrown away because they weren’t able to afford it.

“I used to dumpster dive a LOT. Found a TON of good stuff. I might start again if prices keep going up the way they are,” one user said.

“I grew up picking food from the farmers market floor due to lack of money,” another said.

The Daily Dot reached out to user @jillian_rn4 via Instagram direct message.