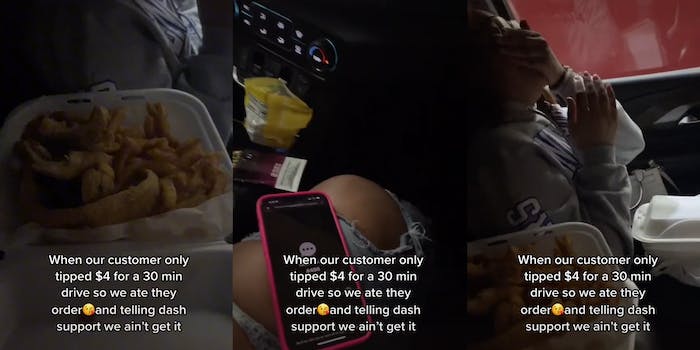 ‘When our customer only tipped $4’: DoorDash driver says they ate customer’s order after they left small tip in viral TikTok, sparking debate (updated)

In a viral TikTok video, a DoorDash driver says they ate a customer’s order because they gave a small tip. The dasher’s apparent actions sparked controversy in the comments.

“When our customer only tipped $4 for a 30 [minute] drive so we ate [their] order and telling dash support we aint get it,” user @saniahduh wrote via text on the TikTok.

The video, recorded by the user in the passenger seat, shows a DoorDash driver sipping on a drink and an open styrofoam box full of food.

With over 13,000 views, the TikTok received criticism in the comments. Some users said they typically tip in person, in which case the DoorDash driver wouldn’t be aware of the tip before accepting the order.

“Sometimes I tip like 3 dollars [and] tip with cash smh sometimes I put no tip I and tip cash,” another said.

“Ain’t worth it to drive in all this snow for $4 to a different city,” the DoorDash driver responded.

Many questioned why the driver accepted the order in the first place.

“Ain’t nobody make you accept that order . You see the trip payout and mileage before accepting. This is literally why people don’t [tip],” one user said.

However, the TikTok user responded to multiple comments claiming that the customer used a “fraud debit card” to pay for their order.

“Who told them [to] order some food with a fake doordash account and a fraud debit card and not even share [an] extra $10 with me,” they said in response to one user.

Some users were supportive of the DoorDash driver, however, arguing that they deserve decent tips.

“As you should, purrr,” another wrote.

Update 10am CT Jan. 11: When reached for comment, a spokesperson for DoorDash told the Daily Dot: “Trust and respect in our community is extremely important and we take reports of this behavior seriously. Our policies strictly prohibit taking customer orders, which will lead to immediate removal from our platform. We are actively investigating this and will take any and all appropriate actions.”

The Daily Dot has reached out to user @saniahduh via a TikTok comment.