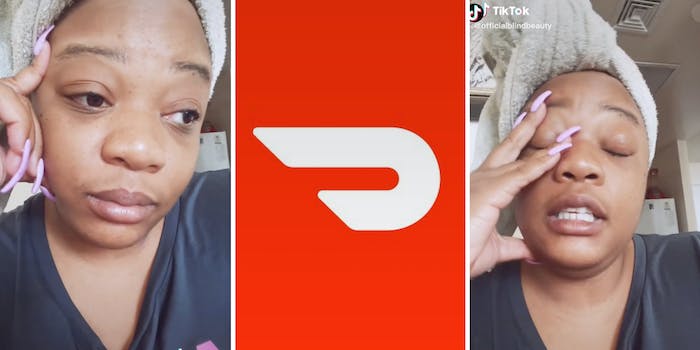 'They act like YOU signed up to deliver food to my door.'

In the now-viral video, user @officialblindbeauty details the full story from her perspective, explaining how one Dasher canceled the order after she requested specific information in text rather than images, and another canceled immediately upon learning she is blind.

There were also issues when the food was actually delivered by a third Dasher, as she explains in the video.

“For those of you who do not know me, I am blind. I lost my sight to pseudotumor cerebri, also known as intracranial hypertension, IH for short, and I developed that condition because of my birth control,” she says at the start of the video.

According to MedlinePlus.gov, certain types of birth control are known to increase the risk of developing pseudotumor cerebri, though the cause of IH is unknown.

As the video continues, she lays out the narrative of what happened.

The day after her birthday, the TikToker was exhausted and decided to order food from DoorDash.

“The first Dasher keeps sending me pictures,” she recalls. “I proceed to explain to her that I am blind/visually impaired…I say, ‘Hey, I’m visually impaired. I can’t see these pictures. Can you please use your words?”

At this point, the creator claims the Dasher canceled the order.

Undeterred, @officialblindbeauty made another order, this time specifying to the Dasher before they’ve picked up the order that she is visually impaired and has specific directions for where the food must be placed. This Dasher also canceled the order, she says.

The TikToker eventually decided to try for a third time, this time not giving any indication of her visually impaired status.

This Dasher did pick up her food but did not follow her directions, allegedly explicitly refusing a request to do so by her building’s receptionist.

In comments, users supported @officialblindbeauty while offering their own complaints about DoorDash.

“Door dash refuse to discipline their workers. instead they make more rules for the customer,” one user claimed. “I deleted the app.”

“They act like YOU signed up to deliver food to my door,” another added.

“And people will hate on us like we wouldn’t rather go get it ourselves,” a third stated.

On her part, the creator says her experiences with DoorDash have primarily been positive.

“…They used to be amazing and their service is getting worse and worse by the day,” she explained in comments. In another comment, she added, “I’ve never had DoorDash not refund all of my money and give me extra credits when these things happen so I haven’t deleted it yet.”

DoorDash itself eventually responded, writing in the comments: “We’re incredibly sorry you had to experience this kind of treatment. Trust us when we say we completely understand your feelings.” The comment says it is the first of two, though the second comment appears to no longer be under the video.

We’ve reached out to DoorDash and @officialblindbeauty via email.

Update 3:43pm CT, May 30: The TikToker told the Daily Dot that there have been no additional updates beyond what what can be seen in her TikTok, and DoorDash has not reached out to her beyond their comment on her video.