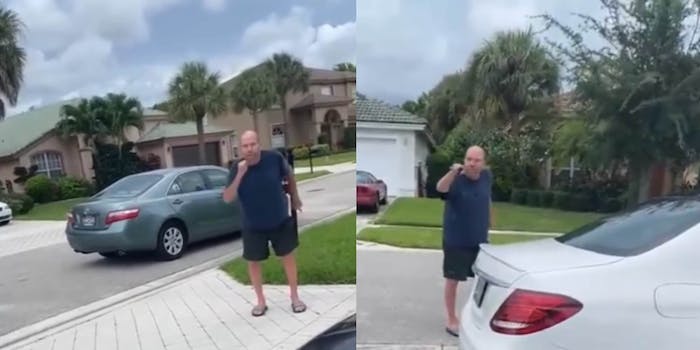 He told the girls they 'do not deserve' to be in the gated community.

These days, not much happens without a phone present.

Our constant access to phones—and, specifically, their cameras—has led to a notable surge in documented instances of hate, racism, and even violence. The latest person to find themselves on the wrong end of a phone camera is Lee Jeffers. The 60-year-old Wellington, Florida resident was caught yelling at a group of teenage girls in a video, which has since gone viral.

The video, shared by the Palm Beach Post, is from the perspective of three 15-year-old girls. One of them lives in the same Wellington neighborhood as Jeffers. By the time the video begins they are walking toward one of the girls’, Breonna Nelson-Hicks, home, where she lives with her grandparents.

Before the video began, the Palm Beach Post reports, the girls had been riding a golf cart with some friends through the gated community when Jeffers approached them. The teens stopped at the community’s security gate and Jeffers, a stranger to them, followed closely enough to nearly hit the golf cart at one point, according to the girls. At this point, the other teens in the cart got spooked and fled.

The girls had just exited the cart and began heading on foot toward Nelson-Hicks’ home when the confrontation began. The video begins with Jeffers shouting that he doesn’t care he’s being recorded because “you don’t belong in this development.”

The girls stay remarkably calm through the entire exchange. They refuse to answer as Jeffers angrily demands their names and Nelson-Hicks’ address. In response, Jeffers announces that he is going to “call the gate, and have you all arrested.”

“You do not deserve to be in here,” Jeffers says in the clip, pointing at the teens.

As he begins to walk away, a neighbor confronts him. Jeffers claims that he was forced to “wait for them five minutes while they’re screwing around in the road.” The girls immediately explain that they were attempting to back up and out of Jeffers’ way.

Jeffers responds by mocking the girls. Nelson-Hicks begins to head inside to grab her grandfather. As she disappears into the home, one of the other girls notes that Jeffers had previously threatened to hit them with his car.

She also points out that they are 15, to which Jeffers bafflingly adds “you could marry in Mississippi or Alabama.” Whatever point this may have been leading to is interrupted by the arrival of Nelson-Hicks’ grandfather. He confronts Jeffers as the video comes to a close, asking “did you threaten a child?”

Following the video’s swift rise to viral status, Jeffers was identified as a U.S. Citizenship and Immigration Services analyst by the Palm Beach Post. The federal agency confirmed his employment as an immigration employee and noted that officials are looking into the matter. A spokesperson for the department noted that they hold all employees to a high standard “regardless if they are on or off-duty.”

“We are looking into the matter that has been reported in the press about this individual’s off-duty behavior,” the spokesperson said in a statement. “The video is certainly disturbing, and we are working to get all available information in considering what action, if any, may be appropriate for the agency to take.”

The Palm Beach County Sheriff’s Office was contacted following the incident, but determined that no crime had been committed. They did note that golf carts are “not supposed to be driven on the road.”