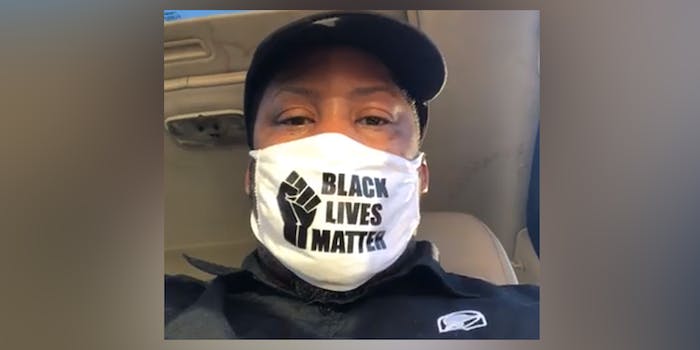 People are now boycotting the company.

Taco Bell made a horde of new enemies after it fired an employee for wearing a Black Lives Matter mask last week.

Denzel Skinner, who worked at a Taco Bell in Youngstown, Ohio, shared a 30-minute Facebook video in which he accused his manager of firing him for wearing a Black Lives Matter mask. Skinner said the restaurant’s air conditioning recently broke, and he opted for the BLM mask because surgical masks were too restrictive when the store got hot.

Skinner’s manager told him to remove the mask, and he refused. He said his manager then threatened to fire him if he walked out, and he did.

Skinner’s original Facebook video has been viewed more than 31,000 times and shared more than 1,000 times. Comedian and rapper Elijah Daniel tweeted an excerpt of the video on Thursday morning; it has already been viewed over a million times.

Daniel also tweeted a screenshot of a message from what appears to be a Taco Bell manager outlining store policy on masks. The message itself is confusing; at one point, the sender says masks are “NOT REQUIRED at this time,” but later emphasizes that “MASKS ARE REQUIRED NOT ONLY BY THE STATES BUT BY TACO BELL AND KFC.” Ultimately, though, the portions of the message in Daniel’s tweet show no evidence that Skinner violated store policy by wearing a Black Lives Matter mask.

Taco Bell told the Daily Dot in an emailed statement on Thursday that it was working to clear up the ambiguity but that it was not against company policy for Skinner to wear the mask. However, Taco Bell said it was going to retool the language so that “this doesn’t happen again.” The company said that it apologized to Skinner.

“We believe Black Lives Matter. We were disappointed to learn about the incident that took place in Youngstown, OH. We take this very seriously,” the statement reads. “While our policies at restaurants do not prohibit Team Members from wearing Black Lives Matter masks, we are working to clarify our mask policy so this doesn’t happen again.”

After Daniel’s viral thread denouncing the company, many Twitter users had all the ammunition they needed to boycott Taco Bell. They publicly disavowed the company using #RIPTacoBell, which is currently the highest-trending hashtag in the United States. Some users have even begun sharing their DIY Taco Bell recipes so that people won’t feel any remorse about canceling the fast food chain.

Taco Bell’s public snafu is especially glaring in light of a June 2 tweet in which the company said it was “muting our channels for the rest of the week to reflect, learn, and listen” and linked to a full statement from CEO Mark King.