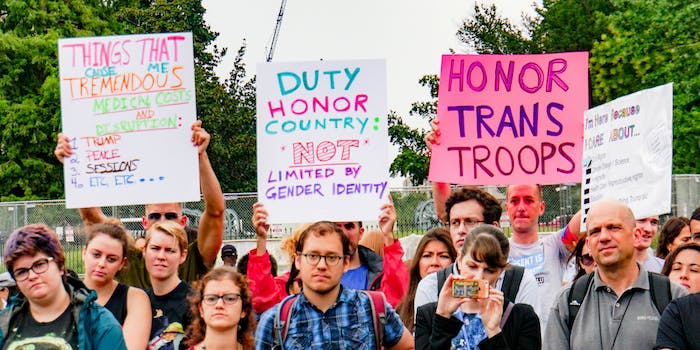 The future of transgender service members is in the Cabinet's hands.

Nearly one month after he initially announced his enormous policy change via Twitter, President Donald Trump issued a guidance on Friday to the Pentagon regarding his transgender service member military ban.

According to Trump’s memo, transgender people cannot join the military from now to beyond Jan. 1, the deadline for when the military was to begin admitting transgender recruits. The guidance reverses a Barack Obama administration order to allow transgender people to openly serve in the military. The Obama order was initially scheduled to go into effect on July 1, but it was pushed back six months to allegedly give military leaders more time to research how to best implement the order.

Existing transgender service members are to remain in the military until Trump’s Cabinet decides how to “address them.” The memo reads: “Until the Secretary has made that determination, no action may be taken against such individuals…”

Additionally, Trump has ordered the Pentagon to stop funding sex-reassignment surgery for service members with the exception of protecting “the health of an individual who has already begun a course of treatment to reassign his or her sex.”

On social media, LGBTQ law advocacy group Lambda Legal announced it would follow through with its previous promises to take action against Trump’s trans ban and will file a suit on Monday on behalf of Outserve-SLDN, a nonprofit transgender advocacy group.

“The president’s order to remove transgender service members from the United States armed forces and deny them healthcare is nothing less than a purge,” OutServe-SLDN Executive Director Matt Thorn said in a statement. “He is implementing this purge based on bigotry, motivated by agents of an ideology that has no concern for the national defense, and in blatant disregard of the experience of career officers who spent more than a year developing and implementing the current policy.”