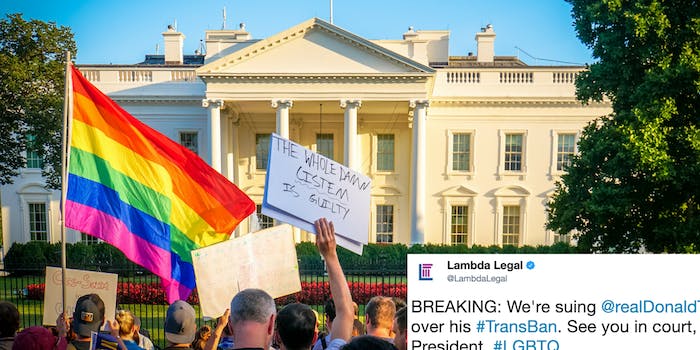 The Department of Defense issued its own memo on Saturday.

President Donald Trump‘s trans military ban might be back as a tangible policy, and the nation’s largest LGBTQ legal organization is suing him for it.

On Saturday, Lambda Legal, the largest and oldest legal nonprofit advocating for LGBTQ issues in the U.S., announced its intent to sue Trump over expanded policies resulting from the president’s ban on transgender military service members.

According to the Los Angeles Blade, sources allege that a policy derived from Trump’s announcement of the ban, called “A Guidance Policy for Open Transgender Service Phase Out,” was developed Friday night by the White House Counsel’s office.

The policy would encourage early retirement, usher out enlisted transgender personnel after the end of their contracts, and fire trans officers up for promotion. While trans service members would be allowed to continue to serve, this policy would not offer protection from harassment or other efforts pushing them to quit. Two sources told the Blade they confirmed from White House and Pentagon sources that the “phase out” proposal is headed to Defense Secretary James Mattis.

“The administration wants to get rid of transgender service members as fast as they can,” the source told the Blade.

In response to the report, Lambda Legal says it intends to sue Trump over the trans ban, calling the policy in the press release dishonorable to the estimated 15,000 transgender military service members actively serving today.

“The safety of all service members—transgender or not—is undermined by a policy like this that distracts from the important missions they have for no valid reason,” Sasha Buchert, Lambda Legal staff attorney and transgender military veteran, said in a statement. “It is also a slap in the face of the leadership who have worked diligently to develop and implement the current policy which has been in place for more than a year without incident.”

“This mean-spirited and discriminatory attack on our community is capricious, irrational, and clearly driven by anti-LGBT forces in the administration who care more about harming transgender people than keeping our nation safe. It is clearly unconstitutional,” Buchert continued.

In a statement sent to the Daily Dot, Jon Davidson, Lambda Legal legal director and Eden/Rushing chair, said the nonprofit is currently preparing to file suit alongside OutServe-Servicemembers Legal Defense Network, a nonpartisan nonprofit for active duty LGBTQ service members. However, they are not yet ready to disclose when they will be filing, who the organizations will be filing suit against, nor who they are representing.

“We intend to challenge the new policy as unconstitutionally violating the Fifth Amendment’s protections of equal protection and due process and are considering additional claims,” Davidson told the Daily Dot.

The White House did not immediately respond to a request from the Daily Dot for comment. However, an Aug. 4 memo from Mattis sent out by the Department of Defense would appear to corroborate reporting from the Blade.

In the memo issued to all department employees, Mattis appears to be reminding those in positions of power to “set an honorable example” and to “play the ethical” midfield. However, the memo does not mention anything specifically about “transgender” personnel nor does it provide context as to why Mattis would issue such a reminder.

NOW: So, this is weird. The DoD just sent reporters an ethics memo from SecDef Mattis, with no context. pic.twitter.com/URdtFCH2X0

Getting questions if this is authentic. I was sent via normal DoD press list, and DoD confirmed it was sent on purpose. Full version: pic.twitter.com/lLhoZH4wvK

“Those entrusted by our nation with carrying out violence, those entrusted with the lives of our troops, and those entrusted with enormous sums of taxpayer money must set an honorable example in all we do … To ensure each of us is ready to do what is right, without hesitation, when ethical dilemmas arise, we must train and prepare ourselves and our subordinates” Mattis wrote. “Never forget our willingness to take the Oath of Office and to accept the associated responsibilities means that even citizens who never met us trust us to do the right thing, never abusing our position nor looking the other way when we see something wrong.”

The president’s initial announcement, made via Twitter last week, claimed that transgender service members would lead to burdensome medical costs and “disruption” for the military and that it would distract from “decisive and overwhelming victory.” The ban shocked activists and supporters of pro-LGBTQ policy and raised numerous questions as to how the estimated 15,000 active trans service members would be discharged from the military.

Trump’s focus on the financial cost associated with trans service members has been debunked by a Defense Department investigation into the cost of Pentagon-funded gender reassignment surgery. The ban was later believed to be implemented in order to secure a government budget that would fund many of Trump’s campaign promises, including the border wall between U.S. and Mexico.

The chairman of the Joint Chiefs of Staff also refused to implement Trump’s ban “until the President’s direction has been received by the Secretary of Defense and the Secretary has issued implementation guidance.” While the backpedaling from Marine Gen. Joe Dunford gave relief to trans service members and supporters, “A Guidance Policy for Open Transgender Service Phase Out” appears to be arriving sooner than anticipated.