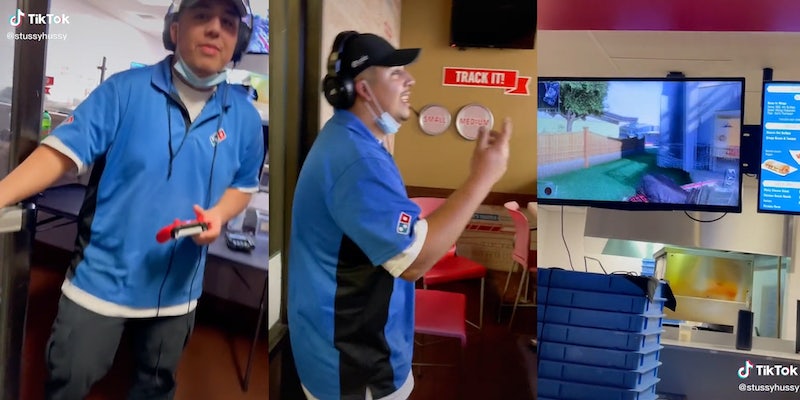 ‘No way he got the Call of Duty on the Domino’s TV’: Viral TikTok shows worker playing video game on the menu screen

'So this is what the dominos tracker meant by warming up.'

A Domino’s Pizza worker was filmed using the menu screen to play a video game while the store was empty.

Captioned “Domiones 4 lyfe,” @stussyhussy’s video of a Domino’s Pizza employee playing a video game got over 2.2 million views since it was posted on Jan. 17.

A voiceover says: “Ain’t no way he’s got Call of Duty on the Domino’s TV.” The Domino’s worker, wearing his headset and uniform, is holding a controller and smiling as he plays what appears to be Call of Duty.

The store appears to be empty as no other customers are in sight. It is unclear if he is being filmed by another worker.

Viewers cracked jokes about the video and praised both the worker and Domino’s.

“So this is what the dominos tracker meant by warming up…,” @vincemcmahonjr commented.

“You going to need to 1v1 me if you want that tip,” @rainbowcadaver quipped.

“Man of culture,” a third said.

“Domino’s takes another W,” another worte.

The Daily Dot reached out to @stussyhussy via TikTok comment and Domino’s Pizza through email.