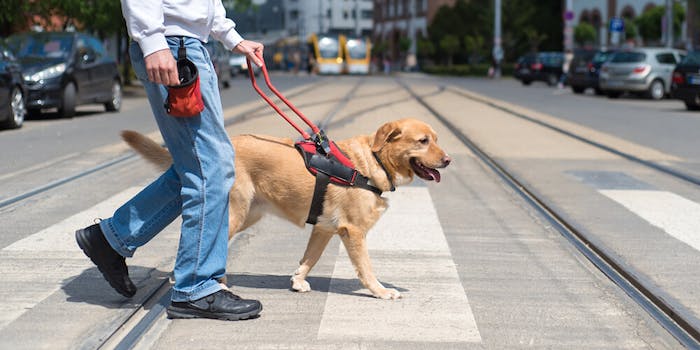 Denying disabled people access to services like transportation is illegal under the Americans with Disabilities Act, and it’s a violation of the terms Lyft and Uber drivers must agree to. Yet many wheelchair users and disabled people with service dogs say discrimination from ride-hailing services is the norm.

Disabled people spoke out this week about the discrimination they often face when trying to use ride-hailing services including Uber and Lyft. In response, people across the political spectrum subjected activists to harassment and doxing.

Disability advocate and public speaker Ryan Honick has cerebral palsy and a service dog named Pico who helps him with tasks made difficult by his disability. After drivers denied him service because of Pico with little to no response from the companies, Honick started recording and documenting his interactions with drivers for proof. In an interview last year with NowThis, Honick said it happens so often that he’s “almost grateful” when he doesn’t have to argue for his rights.

This week, he documented being rejected by three Lyft drivers in under five minutes.

This man says he's consistently denied Uber and Lyft rides because of his service dog — so he's documenting his encounters on video pic.twitter.com/obm1syWuKF

One Twitter activist said her friend, who is disabled, was abandoned by drivers so many times that they were suspended from the app for “too many cancellations.”

Another disability advocate said she was forced to go into private lockdown on Twitter this week after sharing her difficulties getting ride-hailing services. The activist, who asked that her name not be published for security reasons, said she was denied service by Uber drivers five times within a week.

The activist recorded part of an interaction with a driver who arrived, got out of his car to argue with her, and left her on the curb. The activist said she asked for the driver to be trained on ADA compliance, but Uber banned the driver. The activist was then inundated with accusations that she tried to ruin a low-wage worker’s life. She also faced anti-Semitic abuse and was doxxed on various platforms.

my grubhub driver refused to spoon feed me, a disabled adult (self diagnosed ADHD). Why I was right to call the police

Many people on the left were shocked to see so-called comrades defending discrimination against disabled people. The argument boiled down to this: You can’t have class solidarity if you tell a boss a worker broke the rules because you’re throwing a fellow worker under the bus. But the take ignores that disabled people are twice as likely to live in poverty as able-bodied people. And it doesn’t present discrimination against a disabled worker as a betrayal of class solidarity of at least the same magnitude.

seems like people on this site have so internalized the meme of “speaking to the manager is bad” that they genuinely think challenging that behavior is more socialist than challenging Uber on the way it treats drivers, which is so bad uber has been banned from multiple countries

Companies like Uber and DoorDash couldn’t pay for a better situation than this.

Rather than being held accountable for the culture that allows ableism and discrimination, people are vilifying us, disabled people, for speaking out on it.

Your worker advocacy is corporate PR.

Are we creating a competing hierarchy of precarity, where ”workers” are incapable of discrimination because their labor is unstable? And what of social infrastructure for disabled people? Do we reproduce capitalist disposability by continuing to ignore them in our politics?

The people giving well meaning suggestions like "Maybe Uber should have a special list of drivers who agree to get paid a big bonus to carry the burden of serving disabled passengers" are not helping, in fact they suck donkey dick

Even more frustrating for disability advocates is that they feel there are easy solutions to these problems. One idea is allowing drivers to mark that they have a severe dog allergy and allowing riders with service dogs to mark it on their profile, and the system would automatically not match them. Activists also say if a driver discriminates against someone for their medical equipment (which service dogs legally are), they should be given training and the opportunity to do right in the future, not automatically let go after one mistake.

And please just preemptively before everyone says I hate people with allergies https://t.co/B5esfm0ZmF

Speaking as a disabled person and a worker's rights person- if you don't like that a driver can get kicked off Uber because one rider files a discrimination complaint, your issue should be with Uber's appeal process. It's a just cause issue, not a "stop snitching" issue.

But ride-hailing companies appear reluctant to face the issues of disabled riders head-on. Last year, Lyft argued it’s “not in the transportation business” in a federal class action lawsuit about accommodating people with disabilities.

A spokesperson for Uber told the Daily Dot that the company investigates all reports of alleged discrimination and requires drivers to adhere to all federal, state, and local laws regarding disability accommodation. But the spokesperson did not address riders’ problems with “too many cancellations” after drivers turn them down.