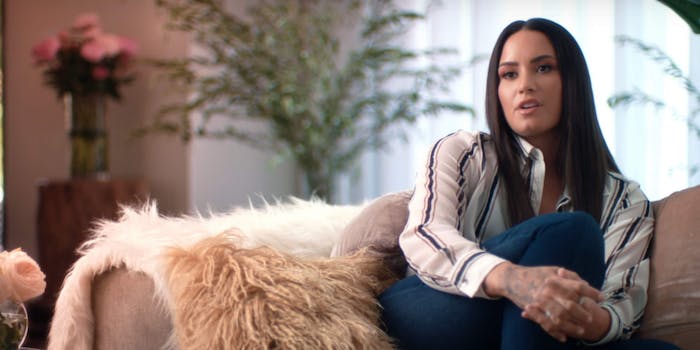 It hasn't been confirmed that it was actually Lovato in the photos, but fans are still upset.

Nude photos of Demi Lovato were reportedly leaked after her Snapchat was hacked.

On Thursday, Lovato’s followers on Snapchat apparently noticed an odd SnapStory advertising nude photos of the singer, and then photos of someone resembling Lovato were posted. It hasn’t been confirmed that the photos are of Lovato, and she hasn’t commented yet.

The photos reportedly ended up on chat app Discord, where several users posing as Lovato claimed to have access. The group behind the hack might be the same one that took responsibility for hacking Twitter CEO Jack Dorsey’s account in August and Chloë Grace Moretz’s Twitter account in September. In those cases the group went by Chuckle Squad. Here, people were invited to join “Chuckling Server,” according to one screengrab.

Demi’s Snapchat got hacked. @Discordapp, please remove this server as they are from a hacker tricking people into joining their server for Demi Lovato’s nudes. #DemiLovato. pic.twitter.com/8M7vFKQTJh

Though Lovato faced backlash earlier this month for a baptismal trip to Israel, her fans are protective, and expressed disgust and frustration at the leak.

no one deserves to have their private pictures leaked and i don't care if you don't like her, this behavior is DISGUSTING so do NOT tweet and share. thank you. #DemiLovato

Lovato has been open about her struggle with body image, and recently posted an unedited bikini photo to her Instagram, stating: “This is what I got. I want this new chapter in my life to be about being authentic to who I am rather than trying to meet someone else’s standards.”