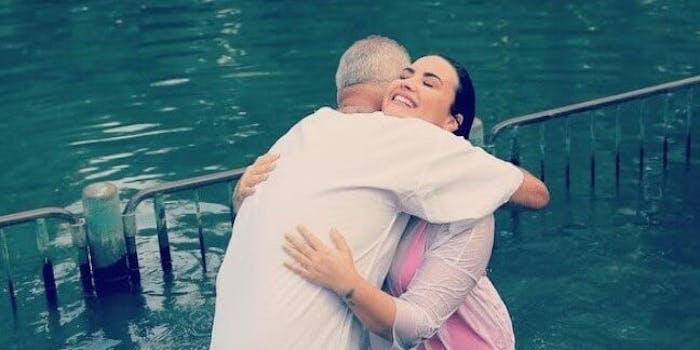 Pro-Palestine activists are coming after Demi Lovato for pictures she posted from a sponsored trip the singer took to Israel.

“I am an American singer. I was raised Christian and have Jewish ancestors. When I was offered an amazing opportunity to visit the places I’d read about in the Bible growing up, I said yes,” Lovato wrote in an Instagram caption posted on Wednesday.

“This trip has been so important for my well-being, my heart, and my soul. I’m grateful for the memories made and the opportunity to be able to fill the God-sized hole in my heart. Thank you for having me, Israel,” Lovato said. The caption accompanied pictures of the singer being baptized in the Jordan river, touching the Western Wall, and smiling as she posed in front of various other historical sites.

Lovato didn’t clarify who paid for the trip “in exchange for a few posts” but quickly came under fire for them as pro-Palestine activists accused the singer of showing support for Israel with regards to the decades-long religious conflict.

The singer turned off the comments to the Instagram post once the criticism started rolling in, so many turned to Twitter to express disappointment in the singer.

“Don’t mean to be rude but Demi Lovato is THE most problematic star out there right now 🤭 she’s so rude to her fans and has muted all the comments on her Israel/Palestine ig posts because she knows it’s polticially incorrect xo,” user @katyallisonn wrote.

“demi lovato ignoring the genocide in palestine for a free trip & then being like “thank you isra*l” the ignorance i-,” user @buttrflytae said.

According to TMZ, Lovato then posted an apology to her Instagram story which was then deleted within 24 hours.

Lovato claimed to have no knowledge about the trip’s potential political baggage, writing: “this was meant to be a spiritual experience for me, NOT A POLITICAL STATEMENT, and now I realize it hurt people and for that I’m sorry.”

Her apology only drew more criticism on Twitter, as people seemed to find it lackluster.

“why is demi playing victim here does she even know what’s happening in palestine,” user @btsaoas wrote.

“Demi Lovato’s comments on the backlash aren’t doing her any good. Literally not one of her comments mention Palestine or Palestinians, she says she’s sorry if she hurt or offended anyone and that she realized that shes hurt people from this and yet she can’t call us by our name?” User @Rcneem_ wrote.

Demi Lovato’s comments on the backlash aren’t doing her any good. Literally not one of her comments mention Palestine or Palestinians, she says she’s sorry if she hurt or offended anyone and that she realized that shes hurt people from this and yet she can’t call us by our name?

A representative of Demi Lovato has not responded to our request for comment.