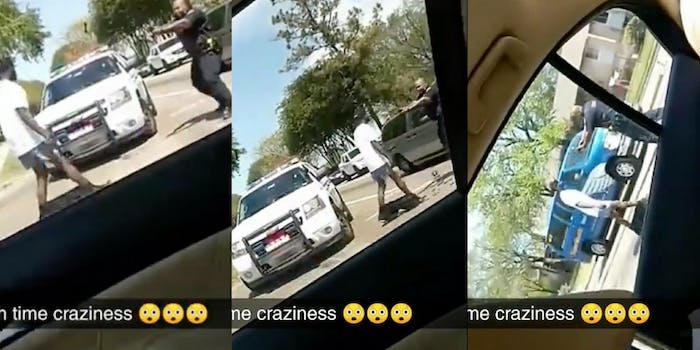 Relatives say the man was 'never the same' after the death of his two children.

A Houston woman is in mourning after her unarmed brother, 34-year-old Danny Ray Thomas, was fatally shot by Houston police on Thursday.

In a video obtained by the Houston Chronicle, a Harris County Sheriff’s deputy is seen with his weapon drawn, backing away from Thomas as Thomas walks toward him, his arms down, and his pants around his ankles. In the next shot, Thomas is seen laying on the ground as the officer handcuffs him. Thomas was pronounced dead at Houston Northwest Medical Center.

According to witnesses who saw Thomas prior to the shooting, Thomas was walking in the middle of a Houston intersection, his pants dropped as he talked to himself and hit passing vehicles. Upon striking a white vehicle in the intersection, the driver exited his car and tried to engage with Thomas physically. That’s when a Harris County Sheriff’s deputy, who has remained unnamed, noticed the situation and approached the men.

According to the deputy, Thomas began walking toward him once he exited his vehicle, and ignored verbal commands to stop. The officer then fired at Thomas once. Thomas’ is the ninth officer-involved shooting in Houston this year, and the fifth to result fatally.

While a spokesperson initially said Thomas had “some object” was in his hand, he later stated that no weapon was recovered at the scene.

“Fearing for his safety, the deputy discharged his duty weapon, striking Thomas once in the chest,” the statement read.

A Snapchat video of the moments leading up to the shooting, appearing to be filmed from a white car situated in the intersection (as seen in the video obtained by the Chronicle) shows Thomas shuffling up to the deputy. The video does not show the shooting and has since been uploaded to Facebook.

Marketa Thomas, Thomas’ sister, told reporters that she relied on him through their struggles. She said they both suffered from depression, and stated there was no justification for her brother’s death. Relatives said Thomas “was never the same” after the death of his two children in 2016.

Thomas’ children, 5-year-old Kayiana and 7-year-old Araylon, also known as “Ray Ray,” died when their mother and Thomas’ wife Sheborah Thomas allegedly drowned them in a bathtub with a plan to move away. At the time, Thomas was serving a three-year prison sentence for a drug offense, and declined an interview, though a spokesman characterized him as “pretty upset.” Sheborah is awaiting trial on two capital murder charges.